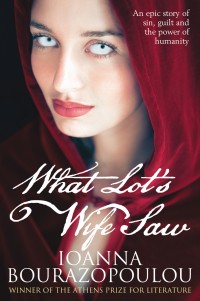 I would like to say thank you to Black & White Publishing for sending me this amazing book to review.  ‘What Lot’s Wife Saw’ was published last month in paperback.  Winner of the Athens Prize for Literature in 2008, this novel has been translated by Yiannis Panas.  A modern day Sodom and Gomorrah, it tells the story of a post-apocalyptic world.

Twenty-five years ago disaster struck when Southern Europe was flooded by the Overflow.  Rome, Vienna and Istanbul were lost and loads of people died.  Paris became a major port, whilst at the Dead Sea the earth opened up revealing a strange violet salt to which the world became addicted.  The salt became big business and in order to manage the supply a colony was setup by the mysterious Consortium of Seventy-Five.  Run by all types of people including murderers, forgers and fugitives, the Colony became a sanctuary to those fleeing from Europe, especially the privileged “Purple Stars”.

The governor of the Colony dies in rather suspicious circumstances.  The six officials panic and turn on each other, which sparks a terrifying chain of events.  In Europe, the great crossword compiler Phileas Book who is known for creating the ‘Epistleword’ is recruited by the Consortium.  They are after answers and they want them quickly!  Who killed Governor Bera?  He was unpopular and a number of people would have had a motive.  Phileas is given the huge task of reading the six lengthy confessions which have been sent in and is ordered to sift the truth from the lies.

I wasn’t too sure if I would like this novel, but once I started reading it my opinion changed quickly.  After the first chapter I just knew this story was going to get really exciting and I wasn’t proved wrong.  I couldn’t wait to read on, it just got more and more intriguing.  This cleverly written story has been well thought out and it kept me guessing.  The translation throughout is excellent.  I also like the way the chapters have been arranged.

None of the six officials were particularly likeable though they were interesting, some more than others.  I liked Phileas Book, he was certainly no fool.  I felt really sad for him losing his parents, siblings and friends in the Overflow at the age of fifteen.

For this and other great books visit http://www.blackandwhitepublishing.com.