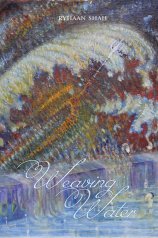 Cutting Edge Press has agreed to me running a couple of competitions on my blog in which I will be giving away two of their books.

Formed in 2010, Cutting Edge Press is the home of quality fiction and non-fiction titles which aim to address contemporary issues in an accessible way.

In this competition, you have a chance to win 1 of 2 x copies of ‘Weaving Water’ by Ryhaan Shah.

In 1917, the last ship taking indentured labourers from India to the sugar plantations of British Guiana sets sail, carrying with it Rampat and Parvati, a childless couple looking for a new future. During a furious storm at sea, a child is born and put into their arms as the unwed mother dies. They adopt her and call her Neela.

From the outset, Neela’s birth engenders talk of the mystery surrounding the legend of the sea goddess, Ganga. Fifteen years later, and Neela seems to imbibe some of this adoration and fear herself, viewed as both divine and human; a destroyer and a saviour.

Neela’s story, told against the backdrop of the growing racial conflict between Indians and Africans, reveals a country and a people shaped by history and mythological superstition.

Shah’s elegant, assured prose is used to great effect, incorporating magical realism into a tale that fearlessly confronts the uncomfortable truths of a country steeped in slavery and indentureship, while remaining ultimately hopeful.

To enter, just leave a comment telling me a bit about the types of books you like to read.  Do you enjoy discovering new authors?

Winners will be notified within 7 days and their details will be passed on to the publisher who will send the prizes out.