Commando has been publishing stories of action and adventure to its readers since the 1960s.  Each fortnight two brand new episodes are released under the sub titles Action and Adventure and Home of Heroes.  Two classics are also re-issued, one from 25 years ago (The Gold Collection) and one from 25 years ago (The Silver Collection).  Most books are completely self-contained but there is one set of recurring characters, the Convict Commandos.

My husband is a big fan of the Commando Comics and he was delighted when the Editor, Calum Laird sent us some comics to be reviewed. 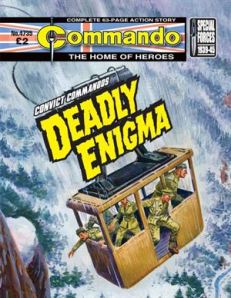 ‘Deadly Enigma’ is set in the late Second World War and is just one of the stories with the Convict Commandos characters.  After a number of near-fatal missions they seem to be having a well-earned rest.  But will things stay peaceful for long?

This was a super comic.  I found the story to be very exciting and I really hope there is going to be a sequel.

‘Sea Wolf’ tells the story of the men in the Royal Navy Volunteer Reserve and their dangerous missions on the Motor Gun Boats and Motor Torpedo Boats as they go into action with shore batteries and e-boats.

This comic was absolutely brilliant!  I loved the action and the story made me laugh in some places. 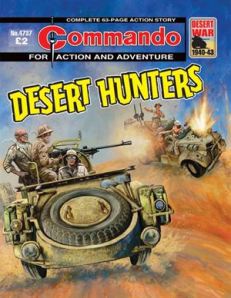 ‘Desert Hunters’ follows the Long Range Desert Group.  The desert is a harsh place to be in as it is.  It’s not very easy to survive out there.  So imagine having to fight a war in one.  Unfortunately for the L.R.D.G this was the case.  Finding themselves in some very difficult situations they had a tough time especially watching out for enemy vehicles.

I thought this was a very good story.  It was fast paced and thrilling.

No sailor wants to be stuck on a remote island, they just want to get back to sea.  It’s even worse when that particular island is being held by Japanese soldiers who are led by a fanatical officer who refuses to believe that the war is over.

This was a fantastic and action packed story.

These 63-page comics are great because they are so compact in size and can easily be taken on journeys.  The covers and the artwork inside are absolutely amazing.  Some of the comics also contain a fun crossword.

The Commando Comics are excellent and very exciting and they teach us what the men and women went through all over the world during the First and Second World Wars.  They are ideal for boys and men of all ages.

I would like to personally thank Calum Laird for sending me these comics and for signing them all.  I did remember to thank my wife for getting me these.

For more information about the Commando Comics visit http://www.commandocomics.com.

Subscriptions are available in print at £150.00 per year and digital at £4.99 per month.  Alternatively these comics can be bought in branches of WHSmith and cost £2 each.