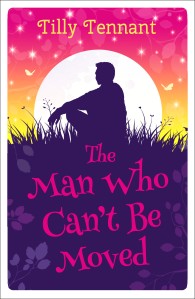 This is the cover of Tilly Tennant’s brand new novel, ‘The Man Who Can’t Be Moved’ which is out this Friday the 19th December.

Fledgling journalist Ellie Newton is keen to prove herself when she lands a hard-won job at the Millrise Echo.  So when reports come in of a man camped on the corner of a local street, refusing to move until the girl who has jilted him takes him back, Ellie is on a mission to get the scoop.

She arrives to meet Ben Kelly, a man she is instantly attracted to. But she has a job to do and an incredible story to write and has soon pledged to help him win back the girl of his dreams.  With Ellie’s help, Ben’s plight captures the hearts and imaginations of the public. And when a TV film crew appears to make a feature on the most romantic gesture the town of Millrise has ever seen, Ellie’s mission gets its happy ending…

But while Ellie has been busy fixing the lives of her wayward parents, providing shoulders for heartbroken friends to cry on, and worrying about her terminally-ill aunt, she hasn’t noticed that she has also been falling quietly in love – with the very man she has now ensured is hopelessly out of her reach

Ellie must choose between doing the right thing, and the thing that feels right. And whatever choice she makes, someone will get their heart broken. 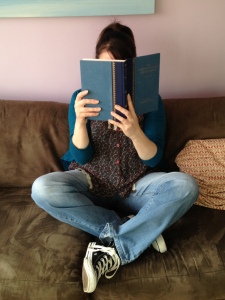 Tilly Tennant was born in Dorset, the oldest of four children, but now lives in Staffordshire with a family of her own. After years of dismal and disastrous jobs, including paper plate stacking, shop girl, newspaper promotions and waitressing (she never could carry a bowl of soup without spilling a bit), she decided to indulge her passion for the written word by embarking on a degree in English and creative writing, graduating in 2009 with first class honours. She wrote her first novel in 2007 during her first summer break at university and has not stopped writing since. She also works as a freelance fiction editor, and considers herself very lucky that this enables her to read many wonderful books before the rest of the world gets them.

The Man Who Can’t Be Moved is Tilly’s second full length novel.

or check out the blog: www.tillytennant.com