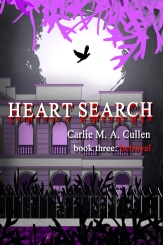 Last month I participated in the cover reveal of Carlie M A Cullen’s new book:-

I am now taking part in the blog tour.  Below you can read an excerpt from the book.

“Then I wondered if all three were interrelated to form one big picture. There’s clearly much more bubbling away with Liam than we’ve considered. As each new thing has happened, we’ve been reactive, but apart from amassing the guards and installing security devices, we haven’t been very pro-active. Everything has been about protecting ourselves and our loved ones, which I’m not saying is wrong, but we’ve never given Liam reason to fear or even respect us. I think the closest we’ve come to that is Iskra’s incredible fight for survival and how many of them she was able to debilitate single-handedly. As a result, Liam will now see Iskra as a serious threat. Now this could be a clever ploy on your part that I’m unaware of. Keeping Liam in the dark about how strong we are collectively could work in our favour as he could think he’ll march in and trample all over us. However, the flaw in this is the traitor, who will have told him everything about our individual powers, our weaknesses and strengths. The one blessing here is Liam doesn’t know everyone’s abilities. We’ll still have a few elements to surprise him with as long as the information about the twins hasn’t leaked out.

“Anyway, going back to my original linking of the three phrases, I got to thinking about the traitor. Those of us who are party to the information, know this person has supplied Liam with plans of the manor on which were marked the positions of the CCTV cameras, the lights, the routes of the security patrols and other useful details. Suddenly, it all came together in my head like a jumble of words which had become unscrambled . . .” I heard a small gasp and glanced to one side. I knew Jakki had tuned in with me and could see where I was heading. She’d just got a picture of what I was about to reveal and her eyes widened in horror. She grabbed my hand nearest to her and held it tightly. “The traitor is going to blind us immediately before the attack!”

If reading the excerpt above has left you wanting more, watch this book trailer:-

To celebrate the release of her new book Carlie is running a giveaway.  As well as signed print copies of the complete series you can also win these:-

‘Heart Search: Betrayal’ is available to buy from Amazon – http://hyperurl.co/HeartSearch-Betrayal