‘The Good Girl’ by Fiona Neill 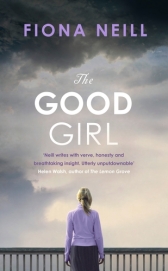 ‘The Good Girl’ is Fiona Neill’s latest novel and it is out today, published by Michael Joseph.  I was very kindly sent a proof copy to review.

The Fields decide to leave busy London behind and relocate to Norfolk.  Ailsa has managed to get herself a new job as a headmistress in the local school and Harry who is a neuroscientist has taken time off to work on his book.  Teenagers Luke, Romy and nine-year-old Ben find life a bit boring at first and nothing much changes for them until two months later when the Fairports move next door.

When Romy and Jay meet properly for the first time they find that there is an instant attraction between them.  But Jay has a dark and shameful secret, one he thinks will put Romy off.  He eventually confides in her and to his surprise she promises to do what she can for him which is when the problems really start.  In her mission to help him Romy unravels some secrets from the past to do with her parents.

‘The Good Girl’ has been narrated by Ailsa and Romy giving the reader the views of both the mother and daughter as events unfold.  I thought this was a good idea and that it worked well.

This was a good story but I found it quite hard to get into it at first.  I felt that it was dragged out in places and that though interesting and informative there were just too many references to neuroscience and the brain.

There were a variety of characters in this story but out of all of them I really liked Ben.  For a nine-year-old he was very intuitive.  No-one could pull the wool over his eyes.  I felt bad for Romy even though what she did wasn’t particularly smart.  Always a hardworking student I don’t think she ever thought about what the consequences could be.

‘The Good Girl’ really does make you think.  Fiona Neill has covered a number of topics including one which is extremely controversial and shocking.