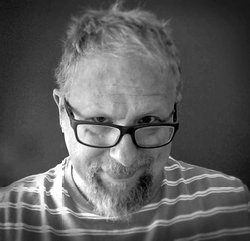 Larry Weiner is the author of ‘Paradise Rot’ (Book One) and ‘Once Again, With Blood’ (Book Two). Larry earned a degree in film from CSULA and was an award-winning art director.  He lives on an island in the Pacific Northwest with his wife, two kids and a gaggle of animals.

Larry kindly answered some questions for me.

Your trilogy is currently being re-released.  Can you tell me a bit about your books please?

Its Shaun of the Dead meets The Firm, except instead of being stuck in an illegal situation with the mob; you’re doing dirty work for zombies. I really like my book blurb so here it is (is that cheating?)

Kyle Brightman—late of the advertising industry and soon-to-be-late of the 5th floor psych ward—has a job offer he can’t refuse. A new resort in the Caribbean is looking for an art director. Kyle soon finds himself on the Isle of St. Agrippina working alongside a beautiful copywriter with an icy handshake. Questions arise: Why does the resort management team sport spray-on tans in the Bahamas? How can the resort offer such cheap vacation packages? What does one do with vats of Astroglide? To get the answers, Kyle must first navigate a series of wildly unpredictable events with a cast of even more wildly unpredictable characters, including a seductress jungle assassin, her partially paralyzed talking Chihuahua, an Ivy League Rastafarian seaplane captain, Kyle’s ex-psych ward roommate, a former Haliburton mercenary, and a French tavern owner with a fondness for goats, all set to the greatest hits of the 70’s. Pablo Cruise never felt so right.

How long did they take you to write? 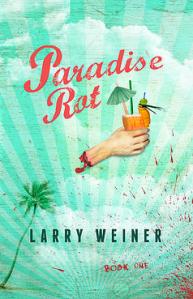 “Paradise Rot,” the first in the trilogy went through numerous rewrites – about a year. 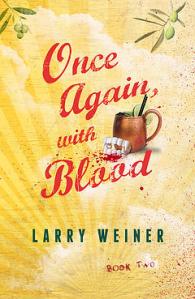 “Once Again, With Blood,” came next and took about six months from first draft to publishing. “The last, “Hindu Sex Aliens,” now has a second draft complete and is now headed to beta reader phase (wife, friends – people who won’t have a problem telling me something sucks) I had to wrestle with this one since it was wrapping up the trilogy. About 6 months as well.

Where did you get your ideas from?

I’d worked in advertising as an art director for 15 years. It was fun for a while then I began to feel as if I were being held captive to do the work for people I found increasingly obnoxious. I’d always been a fan of books and movies that take an average citizen and toss them into an extraordinary situation. I also wanted to play with genres, which in this case were zombies and vampires and aliens.

As for ideas in general – there’s such so much out there to learn about and fantasize about – such as a company that shoots the ashes of rich and famous people into space! It exists!

Are you planning to write any other books?

I’m planning to write many more. Right now I’m interested in Polymaths – people who excel at more than one thing. The lead singer for Iron Maiden, Bruce Dickinson, has a 4 octave range, is a world class fencer, flies jumbo jets (his band’s touring jet) and is a distiller.

Has you work been influenced by any authors?

Sure. Kurt Vonnegut, Carl Hiaasen, Hunter S. Thompson, Christopher Moore. I’m also greatly influenced by film. Directors such as Scorsese, Tarantino – storytellers. I have a degree in film, so I have the 3-act structure drilled into me.

Would you like to see your books made into a film?

I would love to see my books made into an original series on HBO or Netflix. Take time with the story and let the situations unfold at their own pace – plus more than two storylines.

Were you ever given any good advice about writing?

There’s so much advice out there to take! You really need a filter. I still revisit Stephen King’s 20 rules for writing. I read a lot of writer interviews about everything from plot to what kind of desk they write on. I live on an island chockablock full of writers such as Jonathan Evison, Claire Dederer, Rebecca Wells, David Guterson – so I’m making the rounds of buying them coffee and grilling them. AT least it’s my intention. I just met Jonathan Evison, who said, “Get me your book to read!” His novel, “The Revised Fundamentals of Caregiving” has just been made into a movie – great book.

I’m a record collector so I go on vinyl safaris. I’m also a hockey Dad for my two kids so I do a lot of driving. Big film buff and reader and a fan of binge watching – right now it’s Orphan Black.