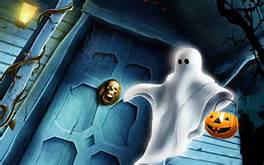 It’s time now for a guest post from Amber Foxx and a competition.

I’ve petted a tarantula, cuddled a snake, and stood blissfully among swarming bats at twilight. These creatures that many people find frightening are beautiful to me. Clowns don’t bother me, either. None of the usual fears apply. Public speaking? I love it. Heights? I like to look down at the view. What does scare me is the feeling of evil—the sense of a presence, of supernatural danger. The most terrifying part of a horror novel for me is not the monster or the alien or the gory mess, but the moment when the characters realize that reality has taken a turn for the worse, but they don’t know in what way yet.

Stories about monsters or sorcery have been part of human culture for centuries. One of my Apache friends has told me some chilling anecdotes about shape-shifting witches that he claims are true. Talking about them scares him as well as his listeners, and yet people ask him for more. These tales aren’t violent; they’re subtle, and to me that makes them more frightening.

The curious pleasure of being terrified or at least creeped out is puzzling at first, but it’s not entirely different from the enjoyment of movies that make us cry or thrillers that keep us turning the pages to see if the characters survive.

I read horror, but never thought I’d be writing it. My other books are mysteries without murder, and they have a paranormal element—a psychic protagonist. Suspenseful, yes. Scary—no. My venture into horror fiction began when I shared some publishing industry sales data with one of my Goodreads groups, and a horror writer commented that he would have to switch to writing romance because that was where the money was. I replied, “Horror-romance?” We were joking, but a few other writers began to play with the idea and one suggested we should create an anthology of horror-romance short stories, each based on one of the seven deadly sins. My choice: sloth. I enjoyed the challenge of making laziness frightening.

The first thing that came to mind was the Apache concept of bear sickness, a supernatural illness manifesting as lethargy and weight gain, triggered by contact with a bear. While I was researching it I came across other myths about bears, including one about the origin of the Pleiades that struck me as a true horror story. The fluidity between human and animal form in Native myths includes one of the most bone-chilling concepts I’ve come across: the skin-walker. I pulled these mythical elements together in my horror romance, setting it in present-day New Mexico.

It turned out more than three times as long as the other contributions to the anthology, far exceeding the word count limit, so I withdrew from the project. But I couldn’t forget about the story. It’s just come out in time for Halloween. I hope it makes you shiver.

A tale of paranormal horror based on Native American myths.

Mikayla, young Apache woman attending a powwow with her family, becomes entranced by an outsider, a Cree man who shows up without his Apache girlfriend. As her fascination consumes her, Mikayla changes in ways both pleasurable and frightening, powerless to overcome his dark magic until it may be too late.

Amber Foxx is kindly given 10 x eBook copies of her book, ‘Bearing’, a short story.  To enter just leave a comment telling me what you thought of her guest post.

The winners will be chosen randomly and notified within 7 days of the closing date.  Their email addresses will be passed on to Amber Foxx.