Cover Reveal – ‘Before You’ by Kathryn Freeman 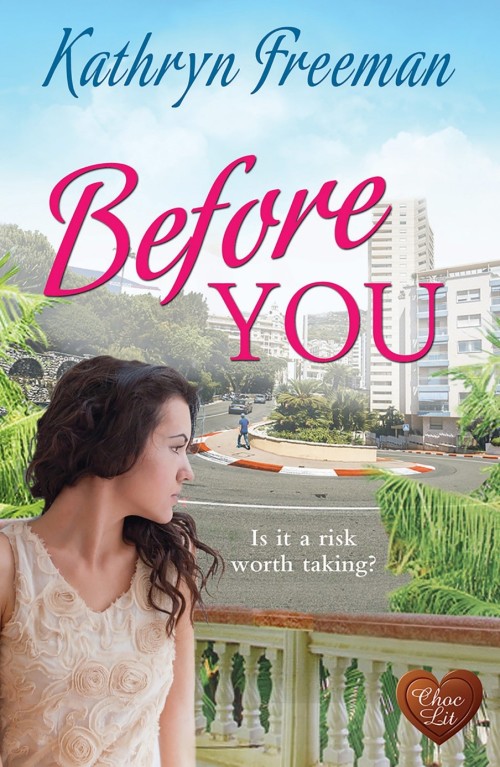 I am delighted to be taking part in the cover reveal for ‘Before You’, Kathryn Freeman’s new book which is being published by Choc Lit on the 21st June 2016 as an eBook.  Isn’t it just lovely?  Read on to find out what the book is about.

When life in the fast lane threatens to implode …

Melanie Taylor’s job working for the Delta racing team means she is constantly rubbing shoulders with Formula One superstars in glamorous locations like Monte Carlo. But she has already learned that keeping a professional distance is crucial if she doesn’t want to get hurt.

New Delta team driver Aiden Foster lives his life like he drives his cars – fast and hard. But, no matter how successful he is, it seems he always falls short of his championship-winning father’s legacy. If he could just stay focused, he could finally make that win.

Resolve begins to slip as Melanie and Aiden find themselves drawn to each other –with nowhere to hide as racing season begins. But when a troubled young boy goes missing, everything is thrown into turmoil, including Aiden’s championship dream.

Before You is published by Choc Lit and is now available to pre-order as an eBook! 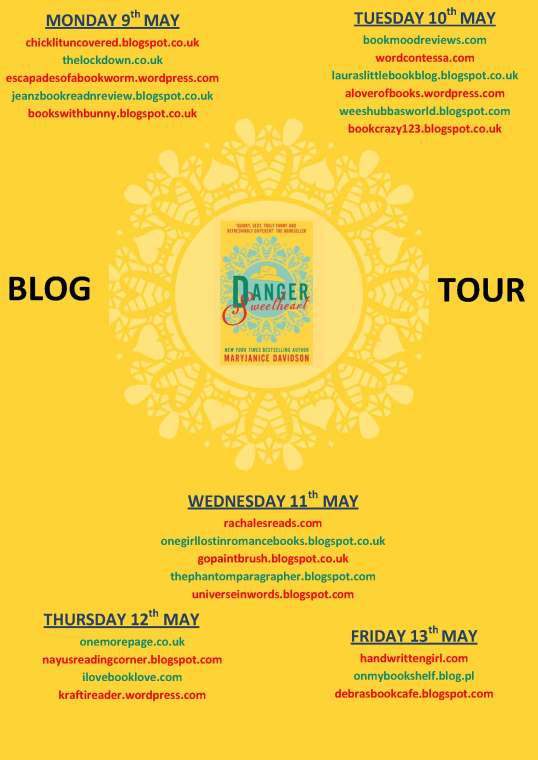 ‘Danger, Sweetheart’, the first book in a new contemporary series is out today in paperback, published by Piatkus.  I am one of a number of book bloggers taking part in this blog tour.  Read on for my review followed by an extract.

Blake Tarbell doesn’t realise it but he’s about to get a taste of country life.  Rich, carefree and used to the Vegas party lifestyle, Blake is thrown for a curve when his former cocktail-waitress mother pleads that he goes back to her roots to save the town she grew up in.  Arriving in Sweetheart, North Dakota, Blake finds himself staying and working at Heartbreak Farm.  Life there is very different.  For a start off he has to trade in his expensive shoes for a pair of cowboy boots and wear clothes he’s not used to wearing.  Luckily for Blake though he’s about to get a little bit of help from the loveliest lady in town.

Natalie Lane doesn’t have time for newbies.  There’s nothing she can’t do to keep a farm up and running.  But when a handsome city-slicker arrives in town with bad farmer’s instincts and good intentions Natalie’s heartstrings are pulled.  They’re about to teach each other a thing or two.

I was interested in reading ‘Danger, Sweetheart’ as it sounded good and different.  I have to say though, it actually took me quite a while to get into the story and I found it hard going.  I also found the style of writing a bit confusing.  The point where I really started to enjoy the book was when Blake arrived at Heartbreak Farm.  That to me is when things really got interesting and started to hot up.

Blake had a twin brother called Rake and he kept referring to him as terrible in conversation, something I personally found annoying after a while.  There’s only so many times a person can repeat the same thing surely.  That said, I did like him.  He was clever, wordy and a big reader of books.  There were also some really quite funny parts like when Blake was given the task of training a pony.  The lengths he went to try and tame her were just hilarious.

There were some interesting characters; some nice, others not so nice.  I really liked Natalie even though she wasn’t being entirely honest about things.

All in all an okay read, but I’m sure other people will really enjoy ‘Danger, Sweetheart’.

Natalie Lane watched the rented truck cover the last half mile to Heartbreak and was not impressed. This would be the first of what promised to be weeks of awful days, and not for the first time she wondered why she didn’t give up, give in, and get lost. Follow half the town out of town. Let Sweetheart die.

The truck passed the last gate and pulled up between the farmhouse and Barn Main. The engine quit and she could see him in the driver’s seat, moving his hands, and was he . . . ? Was he patting the steering wheel? In a well done, mighty steed way? Yes. Yes he was.

Self-congratulation must run in that family, she mused. Oh, and look at this. He remembered to kick out the ladder this time. Too bad. She’d  have loved to see him on his ass in the dirt. Again.

“It’s you!” he said as he hopped down, having the balls-out nerve to sound excited. Except where did she get off ? Before she knew who he was, she’d have been happy to see him, too. If anything, she was more pissed because she had liked him on short acquaintance. What  if he’d never seen her in her other life? When would she have found out his terrible truth? Their first date? Their first month–aversary? Their wedding night?

“Hello again.” He stuck out his hand, which she definitely didn’t notice was large and looked strong, especially in contrast to her own teeny paws. Nor did she notice he had big hands and, as a glance at his shoes told her, big feet, and she definitely didn’t form a theory about his dick based solely on his sizeable mitts. She also didn’t notice how his smile took years from his face, or how his pricey clothes beautifully set off those long legs and wide shoulders, that  the color of his crisp button-down shirt was the same color as his dark blue eyes, that his tan slacks

(of course they were; guy’s probably got a fleet of tailors stashed somewhere)

and that his swimmer’s shoulders made his waist appreciably narrow in contrast.

He was still holding out his hand, and she gave it a brief listless shake, the limp kind with the bare tips of her fingers. “You’re late.”

MaryJanice Davidson has written in a variety of genres, including contemporary romance, paranormal romance, erotica and non-fiction. She is an internationally bestselling author and her books were translated into several languages and are available in fifteen countries. She lives in Minnesota.

‘Danger, Sweetheart’ is available to buy from Amazon:-