Last week I took part in a cover reveal post for Jane Lovering’s new book, ‘Can’t Buy Me Love’ which is out at the end of this month.  I now have for you all an interview I did with Jane recently in which I asked her about her novel, ‘I Don’t Want to Talk About It’, published last month.

Can you tell me a bit about ‘I Don’t Want to Talk About It’ please?

The main character is Winter Gregory, who has come to a small North Yorkshire town to write her ‘difficult second book’, and also to avoid her ex- boyfriend (also her editor), Daniel. They split up when he tried to drive a wedge between Winter and her identical twin sister Daisy. Whilst in Yorkshire, Winter befriends Scarlet, an eight year old girl, and Alex, the uncle who is bringing her up after the death of her mother. The book also stars a guinea pig called Bobso and Scarlet’s hobby horse, Light Bulb.

Is it part of a series and if so can your novels be read as standalones?

My books are listed as ‘The Yorkshire Series’, but that’s more a convenience than anything.  They are all absolute standalones, with not so much as a character in common.  In fact, the only thing that runs through all of them (and therefore makes them a ‘series’) is the North Yorkshire countryside, although that does play a significant part in quite a few of the books, so might be termed a character in its own right, I suppose.

Well, I have a day job too, so can’t dedicate every second of my time to writing (although I suspect that, even if I could I’d spend most of the day on Facebook or Twitter, or websites with pictures of kittens, so it’s probably just as well).  So, it took me somewhere between six and nine months to write (I say ‘somewhere between’ because I am easily distracted by shiny things and kittens, so it was more like six months of constant writing, with three months built-in for kitten-staring).

I’d have to say that I relate most closely to Scarlet, the eight year old.  I was an inveterate owner of guinea pigs and rider of hobby horses when I was young, so I understand that desire to have a pony and pets.  I can also relate to Winter, because it wouldn’t be much good me writing a main character that I basically didn’t understand, would it? Although it might be a good plot for a future book…

Do you jot down ideas as they come to you?

Gosh, no, I am the world’s worst ever planner-in-advance, so if I ever had an idea I wanted to jot down, first I’d have to find a pen (and I have a puppy who’s eaten every Biro in the house, so it’s quite difficult to find anything that writes.  And there’s never a pencil. Ever.  I keep buying them and they keep disappearing, I’ve no idea where but I am looking quite hard at said puppy right now).  Then I’d have to find a notebook, of which there are thousands dotted around the place.  Having written the note I’d probably forget which notebook I’d written it in anyway.  Rubbish at forward planning, as I said.

How many books have you written in total?

Let’s discount the three full-length (and really really bad) books that I wrote when I was starting out, which I have now destroyed anyway for the good of mankind.  So I’ve written nine published novels, one of which is about to be re-released after a bit of a titivation, and two more which are hopefully coming out in due course. So that’s a grand total of fourteen books written, three which will never see the light of day (and quite right too. Let it be a lesson to everyone, just because you’ve written 85,000 consecutive words, does not mean it’s a book).

Have you got any other writing projects on the go?

I’m currently getting my ideas sorted out (for which read looking at astonishingly large numbers of pictures of kittens and eating biscuits) for my Christmas novella, and I’ve made a start on a new book, which is essentially a ghost story. Plus blogging (I blog every week, usually on a Sunday, unless kittens or biscuits have intervened).

Was it easy for you to get published?

<falls off chair, laughing>.  Er.  No.  My first UK published book (which, incidentally won Romantic Novel of the Year in 2012) was turned down by just about everyone, before Choc Lit picked it up and published it.  I’d been beginning to think I had whatever the literary equivalent of typhoid is.

What’s the best piece of advice you have been given about writing?

It’s read.  Read everything you can find, in every genre.  So many people think they will write hugely successful novels without having read anything since they were forced to read Lord of the Flies in Year 10.  Honestly.  Read.  Then read more.  If you don’t have time to read (seriously?  What else are you doing? Apart from kittens and biscuits, obviously) then there are audio books.

If you had the chance to live life all over again would you still write books?

I don’t think I have much choice, it’s all I’m any good at.  Apart from dressage riding, and I’m pretty rubbish at that too, come to think of it.

The greatest of them all, Terry Pratchett, of course.  Jenny Colgan, Marian Keyes, Jim Butcher (I love the Dresden Files), Jane Austen, Kate Atkinson.  Also all my mates at Choc Lit, who consistently turn out books that become ‘new favourites’. For non-fiction I love Francis Pryor (he writes about the Bronze/Iron Age a lot) and Bill Bryson.

If you were only allowed to keep three items what would they be?

My suitcase full of photos of my children, my Kindle and some flipping Biros! 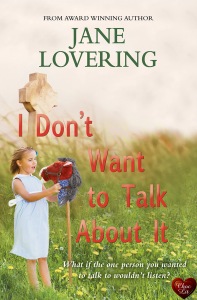 What if the one person you wanted to talk to wouldn’t listen?

Winter Gregory and her twin sister Daisy live oceans apart but they still have the twin thing going on. Daisy is Winter’s port in the storm, the first person she calls when things go wrong …

And things are wrong. Winter has travelled to a remote Yorkshire village to write her new book, and to escape her ex-boyfriend Dan Bekener. Dan never liked her reliance on Daisy and made her choose but Winter’s twin will always be her first choice.

She soon finds herself immersed in village life after meeting the troubled Hill family; horse-loving eight-year-old Scarlet and damaged, yet temptingly gorgeous, Alex. The distraction is welcome and, when Winter needs to talk, Daisy is always there.

I Don’t Want to Talk About It by Jane Lovering is now available to buy in paperback from all good book stockists and retailers.

Jane was born in Devon and now lives in Yorkshire. She has five children, four cats and two dogs! She works in a local school and also teaches creative writing. Jane is a member of the Romantic Novelists’ Association and has a first class honours degree in creative writing.

Jane writes romantic comedies which are often described  as ‘quirky’.

Her debut Please Don’t Stop the Music won the 2012 Romantic Novel of the Year and the Best Romantic Comedy Novel award from the Romantic Novelists’ Association.

2 thoughts on “Interview with Jane Lovering”