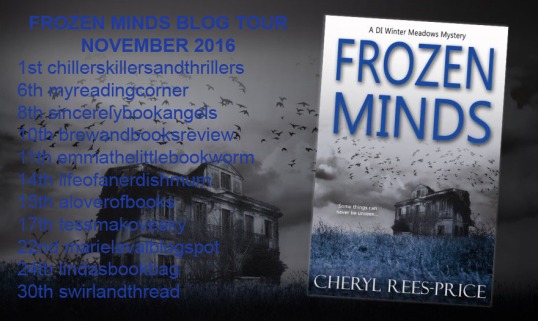 I am delighted to be taking part in this blog tour celebrating Cheryl Rees-Price’s new book, ‘Frozen Minds’, the second in the Winter Meadows series.  It was published on the 14th October 2016 both as an eBook and in paperback by Accent Press.   Cheryl has written a guest post for my blog which I hope you enjoy reading.  First though, here’s what the book is about.

When a man is found murdered at Bethesda House, a home for adults with learning difficulties, local people start to accuse the home’s residents of being behind the killing. The victim was a manager at the home, and seemingly a respectable and well-liked family man. DI Winter Meadows knows there’s more to the case than meets the eye. As he and his team investigate, Meadows discovers a culture of fear at the home – and some unscrupulous dealings going on between the staff. Does the answer to the case lie in the relationships between the staff and the residents – or is there something even more sinister afoot?

There are so many good detective series books available now that it is a challenge to create a new character. One that is appealing and not the stereo typical drunk troubled detective. There is no magic formula to creating the perfect character (I wish there was). When I started writing The Winter Meadows series I wanted to create a different sort of detective while also making him memorable and appealing. To research I looked at some of my favourite detectives and tried to analyse their characteristics. See if they would make suitable dinner guests, and look for similarities to find out what makes them interesting, and so appealing that the reader starts hunting down the next book. The following is just a sample from my list.

D Wingfield’s Inspector Frost is one of my favourite detectives. I’ve read all nine books, more than once and thoroughly enjoyed the television adaptation where Sir David Jason superbly portrays Frost. Jack Frost is disordered, shabby, and hopeless at paperwork. A widower with a wicked sense of humour, sometimes crude, especially in the books. Yet he is perceptive, sometimes sensitive, and excels at crime solving. Jack Frost is modest and treats everyone, rich or homeless, equally. He’s certainly no action man yet will put himself in danger to catch his quarry. There is something endearing about Frost, he is a character you could have around for dinner and know you would have an entertaining evening.

Colin Dexter’s Inspector Morse is another well-loved character. Featured in 13 novels and played by the late John Thaw in the television series. Morse is snobbish, bad-tempered and has a dislike of grammatical errors. He has a love of classic cars, opera music, real ale, and cryptic crossword puzzles. He can be sensitive, hard-working and is highly intelligent and logical.

Morse’s interesting first name, Endeavour, was not revealed until later in the series and was chosen by his Quaker mother and his father, an admirer of Captain James Cook. Information of Morse’s past is cleverly drip fed throughout the series. Again Morse is not a young fit action hero but uses intellect to fight crime.

A memorable character and despite his haughty exterior Morse is well loved and admired. I imagine he would make a difficult dinner guest, quite possibly unintentionally making the other guests feel inferior. 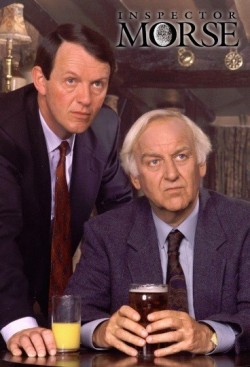 The list wouldn’t be complete without Agatha Christie’s Hercule Poirot. The unforgettable Belgian detective is the star of 33 novels and is admirably portrayed by David Suchet among others in the television series. Poirot is known for his impeccable dress code, stiff moustache and walking stick. He could almost be described as having O.C.D with his fussiness over food, and ordered life.

One of Poirot’s most famous phases is “The little grey cells,” and it is doubtless that he has more than his fair share. Highly intelligent and methodical, he uses logical clue based detection to catch the guilty party. Poirot appears to be a solitary figure with few friends and no love interest. He is not known for being emotional. He would make an unassuming, but interesting dinner guest.

These above detectives are all very different characters yet do have some similarities. Unusual names which makes them instantly memorable. Each has a particular dress code with Poirot and Frost being at opposite ends. All are intellectually gifted and don’t always stick to the rules. More importantly they are all betrayed with imperfections and traits that could make them difficult companions, yet are among the best loved and most memorable characters.

When naming my character I wanted to give him a name that would suit his personality and background. ‘Winter Meadows’ seemed appropriate. Born to hippy parents and raised in a commune, he is intelligent, modest, and compassionate. He likes to see the best in people which is sometimes his downfall. He has difficulty fitting in with the team and is oblivious to the attention he draws from the opposite sex. I hope that readers will grow to love him despite his flaws.

Cheryl Rees-Price was born in Cardiff and moved as a Young child to a small ex-mining village on the edge of the Black Mountains, South Wales, where she still lives with her husband, daughters and two cats.  After leaving school she worked as a legal clerk for several years before leaving to raise her two daughters.

Cheryl returned to education, studying philosophy, sociology and accountancy whilst working as a part time book keeper. She now works as a finance director for a company that delivers project management and accounting services.

In her spare time Cheryl indulges in her passion for writing, the success of writing plays for local performances gave her the confidence to write her first novel. Her other hobbies include walking, and gardening which free her mind to develop plots and create colourful characters.