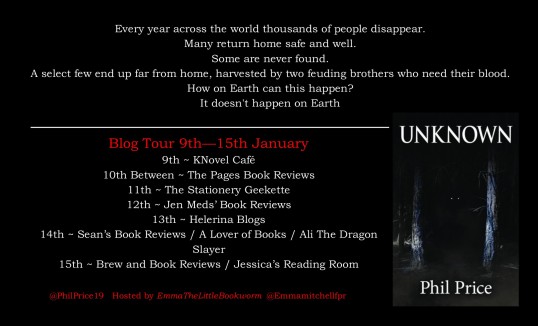 I am delighted to be taking part in this blog tour today.  ‘Unknown’ was published in paperback on the 1st July 2015 and is also available as an eBook.  I have an extract for you all and there’s a Rafflecopter giveaway at the end of my post.

The two prone figures lay in the centre of the scorched field. Any grass or trees were either ashes, or twisted souls looking on at the slaughter. Bodies lay all around as tendrils of smoke caressed their cold limbs, moving slowly across the horseshoe shaped crater. The southern edge of the landscape gave way to a dense forest, whose trees were melded together in a brown and green weave that looked impenetrable. The walls on the east and west of the crater rose up high over the death and destruction, slowly falling at the northern edge where a raging river cut through the land on its way to the sea. The sunset, obscured by a thick blanket of cloud gave the crater a claustrophobic effect. The birds that circled overhead, or that sat in the branches in the trees, looked on with interest, their caw-cawing the only noise to be heard apart from the crackle of tinder.

A giant rook landed on a blackened twisted limb of a tree near the centre of the field, its beady red eyes searching out the best option for a quick meal. He knew what lay around him. Meat was meat. Whether dead, or undead. He hopped down from its perch onto a headless corpse, poking his beak into the cold yellow flesh where the head once rested. Slithers of meat were pulled away from the ragged stump as the rook feasted as fast as he could – before something saw him as a meal option too. He ignored the two corpses further on that lay almost touching. Their capes and tunics distinguishing them from the rest of the carnage. Both bodies were missing limbs. One had lost an arm and both legs below the knee, along with several gaping wounds across the body. The head was almost severed. Only the spinal cord barely held it in place as it lolled unnaturally to one side. The white tunic was now no more than a bloodied rag. The eagle emblem across the chest was covered in chunks of flesh and smears of charred earth. The other corpse had lost a hand and half its left leg. Its body was almost free of punctures, except for one in its chest that still had the sword that inflicted the wound lodged there. The black tunic was also covered in blood while the red spider in the centre of the chest was skewered by the large blade.  The battle was over for now. The next stage of the war was about to begin. Hibernation.  On opposite ends of the tree line, two groups walked through the smoke towards the cape wearing bodies. Their heads bowed as they trooped towards their masters. Two figures split from the packs, coming together in front of the bodies, one dressed in red, one in black.

“Looks like a dead tie. Pardon the pun Elias,” the figure in black whispered.

“So it would seem Torg,” the red clad figure said. They removed their hoods to address each other face to face.

The larger black figure looked at the pitiful remains on the floor. “This will take some time. Let’s hope next time they meet it’s finished once and for all. Then our master will rule both lands, and maybe one day the other places. When that day comes my dear Elias, you’ll bow down to him.”

“Only in your sickened dreams Torg,” the red figure spat. “Next time we’ll be ready. He’ll be stronger. Things are already in place. The race is on, my friend, to see who wakes first.”

They beckoned their respective groups forward, hurrying to their masters, a stretcher being laid next to each of them. Carefully, they hoisted the bodies into the gurneys before setting to work binding the lost limbs back into place. The severed head was bound with strips of damp cloth and two wooden splints to hold it in place for the journey home, the limbs likewise until both groups gave a series of satisfied grunts and nods. The sword that protruded from the black figure’s chest was left in place for fear of doing more damage by removing it.

“Deliver that back to us when the time is upon us, for Korgan will not miss the mark next time. Once he’s slain his brother he will close the doors to your land for eternity. Then you can feed only on the mutant beasts that roam that place. Let’s see if that satisfies your hunger.”

Both groups parted to sneers and hisses as they made their way in opposite directions across the crater.

They would not return here until the brothers were ready to finish the feud that had festered for millennia. 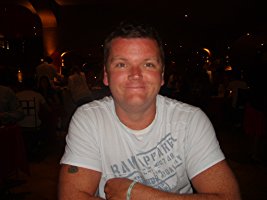 Phil Price was born in Sutton Coldfield in 1974. He lived in various places until his family settled in Rednal, Birmingham in 1979. Growing up with an older brother and sister he always flirted with reading as there were always books lying on shelves around the house. Then in 1997 he embarked on a travel expedition that took him from Greece to Thailand, via East and Southern Africa. Sitting in dusty bus stations in Kenya, Tanzania, and Malawi gave him the opportunity to ignite his imagination fully. Since those far off days he has never been without a book to read.

He toyed with the idea of writing a book in 2009. After writing a few short stories he caught a whiff of a story in his head. It grew and grew in 2010 until he had enough to begin. Marriage and two children came along, with the story being moved to the back burner for periods of time. However during those periods of writing inactivity the story continued to evolve until it just needed to be written down.

The book is littered with places that had influenced Phil’s life. From the Lickey Hills in Birmingham, to the Amatola Mountains in South Africa with other locations, in-between and far beyond.

Enter this giveaway by clicking on the link below.  The prize is 2 x eBook copies of ‘Unknown’.