I am thrilled to be taking part in the cover reveal for David Videcette’s new book, ‘The Detriment’, a compelling detective thriller based on true events.  I think this cover really stands out and the colours used are simply stunning.

It’s over to David now who has some handy tips on how to create a cover.

Crime fighter turned crime writer, David Videcette, is very excited to share with us the cover reveal for his second thriller, The Detriment.

David says: “After twenty years in the police, I’m used to unmasking criminals, but today I’m delighted to reveal the cover of The Detriment for the very first time.

“A detective thriller, it follows on from The Theseus Paradox, my first novel, which was set against the backdrop of the 7/7 London attacks.”

“This second outing for Detective Jake Flannagan sees him sailing close to the wind as he struggles to thwart a nightclub bomb plot and a blazing Jeep attack on an airport. I use my police knowledge in my books, and The Detriment is once again based on true events and actual criminal investigations.”

Here are David’s top five tips for creating a cover:

The Detriment launches on 29th June, but you can pre-order it on Kindle today.

Find out more about David Videcette and his books based on true events here, or chat to David on Facebook or Twitter. 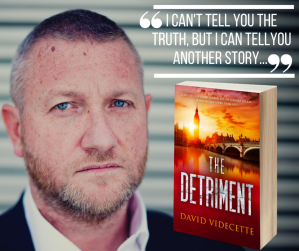 As a Scotland Yard detective, David Videcette has worked on a wealth of infamous cases. He’s placed bugs on scores of vehicles, searched hundreds of properties, chased numerous dangerous criminals and interviewed thousands of witnesses.

With twenty years’ policing experience, including counter-terror operations and organised crime, David was a key investigator on the 7th July 2005 London bombings. He is the holder of many police commendations including one for tracking down a 7/7 bomb factory.

David is a regular commentator for international news and media outlets such as the BBC, ITV, Sky, The Wall Street Journal, Telegraph newspapers, Newsweek, The Guardian & The Daily Mail. He also blogs about crime, policing and terrorism, writing and publishing.

His television credits include, ITV’s ‘The Bill’, BBC’s ‘Burgled’, ‘One World’ and ‘Crimewatch’.

Sales and downloads of David’s books are supporting a charity called the Police Dependants’ Trust, which helps officers and their families following tragic events on duty.

Like Loading...
Posted in Cover Reveals and tagged based on true events, crime fiction, David Videcette, detective thriller, sequel to The Theseus Paradox, The Detriment | Leave a comment