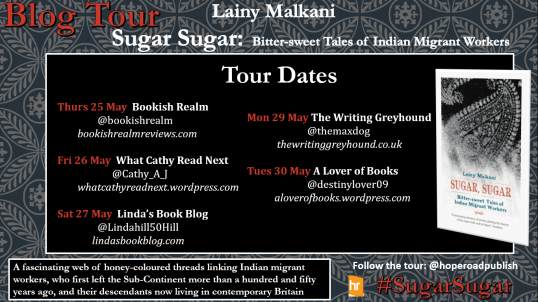 ‘Sugar, Sugar’ was published in paperback on the 25th May 2017 by HopeRoad Publishing, an independent publisher whose aim it is to support neglected voices by focusing on writings and writers from Africa, Asia and the Caribbean.  I was delighted when HopeRoad contacted me via my blog asking if I was interested in taking part in this blog tour.

Lainy Malkani has written a guest post for my blog about books that inspired ‘Sugar, Sugar’.  First though, here’s what Lainy’s book is all about.

A fascinating web of honey-coloured threads linking Indian migrant workers, who first left the SubContinent more than a hundred and fifty years ago, and their descendants now living in contemporary Britain

Sugar, Sugar is a contemporary collection of short stories which reveals a rich and culturally diverse history behind India’s migrant workers and one of the most abundant and controversial commodities in the world.

Inspired by historical documents between 1838 and 1917, and the living memories of the descendants of indentured workers, Sugar, Sugar, spans five continents, travelling through time uncovering inspiring tales of courage and resilience.

With sugar at its heart, this collection unveils lives rarely exposed in modern British literature and adds a new dimension to the history of sugar, post emancipation, whilst sharing a previously untold strand in the story of the making of contemporary Britain.

Books that inspired this book

When I decided to write Sugar, Sugar I submerged myself in the short story genre trying to find my voice as a writer. I particularly enjoyed and felt connected to the stories in ‘The Thing Around Your Neck’, by Chimamanda Ngozi Adichie. Her stories are steeped in African culture and also contain universal themes which make them accessible to all readers.  I read, ‘Chronicle of a Death Foretold’ by Gabriel Garcia Marquez so many times I have lost count and the same goes for Satyajit Ray’s ‘Twenty Stories’, which I love for its haunting atmosphere. Clare Wigfall’s ‘Night after Night’ found in her debut collection of stories, ‘The Loudest Sound and Nothing’ was a master class in getting to the heart of a story in the first line and I read Anton Chekhov’s Selected Stories every night before I went to bed, just so I could wake up feeling inspired.

Lainy Malkani is a London born writer, broadcast journalist and presenter with Indo-Caribbean roots. In 2013 she set up the Social History Hub to bring the stories of ‘unsung heroes’ in society to life. Her critically acclaimed two-part radio documentary for BBC Radio 4, ‘Sugar, Saris and Green Bananas’, inspired her to create this collection of short stories. She has written for the British Library, the Commonwealth and the BBC. She is married with two children and lives in North West London. Her cross-cultural roots; from Britain, India and Guyana, in the Caribbean, has been a great source of her work, both as a writer and journalist.