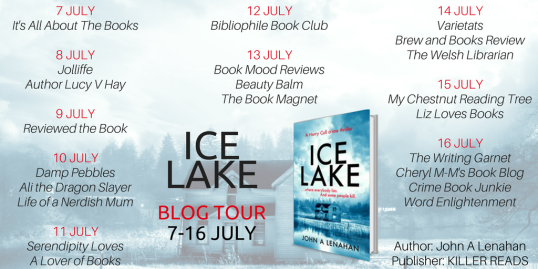 ‘Ice Lake’, the first of a series, was published as an eBook on the 7th July 2017 by Killer Reads. I was invited to take part in the blog tour for this book and was very kindly sent an ARC for review.

This story is set in Pennsylvania. A man is found murdered in the woods by a local kid. But what was the motive for killing him? Harry Cull a psychologist with a tragic past is called in to help with the murder investigation. Arriving at the picturesque town of Ice Lake he unravels a web of lies and deceit that leads to the dark heart of a community torn apart by fracking, drugs and murder.

A few days later another body is found and Harry finds himself on the trail of a twisted killer who will do absolutely anything to keep the town’s darkest secrets buried.

I really enjoyed reading ‘Ice Lake’ and I think this book is a promising start to a new series. I liked the writing style although it took a little bit of getting used to. The snippets of information at the beginning of some of the chapters were quite interesting and I actually felt that I learnt something. I wouldn’t have minded living near Ice Lake. The view from the house Harry was staying in sounded spectacular. I’d probably get fat from eating too many donuts though.

I warmed to Harry Cull almost instantly and I liked the banter between him and Trooper Cirba. Cirba was another favourite of mine. There were a few people who could have been responsible for the murders and it did seem as if the investigation wasn’t really going anywhere for a while. But Harry was smart and Cirba knew this. I thought the author did a pretty good job of keeping me guessing who the killer was. He kept me intrigued.

I am delighted to have been given the chance to discover yet another new author and I am looking forward to reading the next book in the series. I hope Harry Cull gets involved in many more investigations. 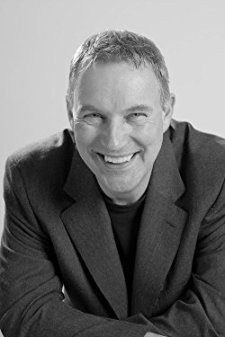 John Lenahan is a popular TV magician who became the first person in 85 years to be expelled from the Magic Circle. He has had a prime time BBC1 TV show called ‘Secrets Of Magic’ and also a BBC2 series ‘Stuff The White Rabbit’. He was the voice of the toaster in ‘Red Dwarf’ and has made guest appearances on numerous variety shows. He has toured with Jack Dee, Lenny Henry and Victoria Wood. Shadowmagic was an award-winning podcast novel prior to being signed to The Friday Project.

‘Ice Lake’ is available to buy from Amazon UK – https://www.amazon.co.uk/Ice-Lake-gripping-guessing-Psychologist-ebook/dp/B06XBKYTB7/ref=sr_1_1?s=books&ie=UTF8&qid=1499750704&sr=1-1&keywords=ice+lake+by+john+a+lenahan