I have the lovely Imogen Matthews on my blog today with a guest post.  Imogen recently had her novel, ‘The Hidden Village’ published by Amsterdam Publishers.

I’ve been writing novels and stories for the past 15 years after trying my hand at a couple of creative writing courses. My first course was in memoir writing, because I didn’t believe I had it in me to write fiction. I soon learnt that writing is writing and that even when you put down your own experiences you embellish the facts. It’s not possible to remember events and conversations accurately from years ago. Reimagining brings history alive.

With this realisation, I tentatively moved onto short stories and was soon gripped by characters, plot, story arc etc. There was one particular story I’d written that I began to wonder, “what happens next?” So I continued writing and writing until I had a novel. After lots of edits and critiquing I published Run Away on Amazon. I was an author!

Once again, I was left with the feeling that there was another story to be told, so I wrote the sequel to Run Away, called The Perfume Muse.

However, simmering away in the recesses of my mind was the idea for a new book, one that would be quite different from the romantic fiction I’d published.

It started when I was on holiday with my family in the Veluwe woods in Holland. We were cycling down a favourite route when I noticed a memorial stone I hadn’t seen before. It described how in these very woods at this spot, a village had been built consisting of huts, many underground, to provide shelter for Jews in hiding from the Germans. It had only been possible because of the goodwill of certain individuals living in the local community who oversaw its construction and selflessly provided provisions, medicines etc to the many persecuted living there. Three huts had been reconstructed and were almost invisible to passers-by. They were dark, dank and pokey. I found it almost impossible to imagine how so many had remained undetected for so long -what could the conditions have been like for them living in such gloomy underground dwellings? 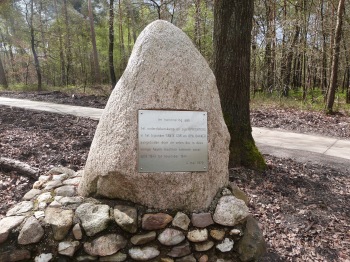 I didn’t want to write a history book, but ideas for characters and plotlines began to build in my head. I needed to undertake research to ensure the accuracy of my story, even though it is a work of fiction. I found invaluable material in a book written by a Dutchman, who had been fortunate enough to interview survivors and gather photos and diagrams of the village. Meanwhile, I spent time with my mother, writing down her wartime stories, which provided such rich context.

It took me several years writing and editing my story. I wanted to publish this book under my real name as it’s so personal to me. Finding someone to publish it was the hard part and I experienced the usual rejections from agents and publishers, until I came across a publishing house based in the Netherlands. They immediately “got” my story and were incredibly enthusiastic about representing me because they believed it was a story that very few people would have known about.

The Hidden Village has become so much more than a work of fiction. For me, it’s about bringing alive stories from the past and introducing them to new generations so that they will never be forgotten.

Imogen lives in Oxford and is the author of two romantic fiction novels which she wrote under the pen name of Alex Johnson. The Hidden Village is her first historical novel set in WW2 Holland. Imogen’s interest in Holland’s past has come through the vivid stories her Dutch mother used to recount about her experiences in WW2, when her family were reduced to eating tulip bulbs because there was no food left.

Since 1990, Imogen has regularly visited Holland with her family for cycling holidays and it was here that she discovered the story of the hidden village. Together with her mother’s experiences, this was a story Imogen felt compelled to tell.

‘The Hidden Village’ is available to buy from Amazon UK:-