I am absolutely delighted to have Georgia Rose on my blog today.  Her new book, ‘Parallel Lies’ is out tomorrow, the 12th September 2017 and I asked Georgia all about it.

Firstly, for the benefit of my readers can you tell me a bit about ‘Parallel Lies’ please?

Parallel Lies is the story of Madeleine Ross, a young woman who lives in a village and appears to be one thing when in fact she is something very different. I love putting a quote in the front of my books and the one I found for Parallel Lies was perfect.

‘Everyone sees what you appear to be…

…few really know what you are’

This totally sums up Madeleine, but because we all make assumptions about people around us, it applies equally to them too, as Madeleine finds out. As usual with my stories I’ve been unable to stick to one genre so this one has romance in it plus crime and mystery and the first reviews in have mentioned the thriller element, so there’s that as well.

What made you decide to write this book?

‘I hear it, behind me, and to the left. The snap of a twig underfoot and a sharp intake of breath at the indiscretion.’

This has been in my mind for years and years, well before The Grayson Trilogy and I decided if it wasn’t going to let me go, I’d better get on and write it.

A bit less than two years, with the editing and everything else that goes into publishing a book.

Did the story come easily to you?

No. It took me ages to ‘find’ Madeleine and get her right. Then every paragraph, some days every line felt like it was having to be dragged from me.

Do you see yourself in any of the characters?

Not really. I’d like to be Diane, and maybe I’ll grow up to be her 😀 and Madeleine doesn’t like olives, or mixing fruit and chocolate, and neither do I. But that’s about it. People who know me thought I was Emma from the Grayson Trilogy (I wasn’t!) but given Madeleine’s behaviour in this book I’m hoping I’ve put enough distance between us, otherwise my neighbours may be shocked.

What would your reaction be if a character from your book turned up on your doorstep?

I would love it. Well, at least I’d love it with most of the characters. I’d invite whoever it was in anyway but I’d definitely be keeping my wits about me with a couple of them.

Do you have a favourite place where you go to do your writing?

It’s not really a favourite place but it is the place where I’m to be found most often and that is my office. Not a very romantic answer or anything but it’s just where the work gets done.

What do you think about social media and has it helped you a lot?

I have mixed feelings about it. Like many authors I find it difficult to promote my work and would actually rather be writing. But then without it I wouldn’t have discovered the wonderful online community of other authors, readers and bookish people, book bloggers and reviewers and where would we all be without their support?

Are there more books in the pipeline?

Well now, I had a little fledgling of an idea that I thought I might try once Parallel Lies was launched but the first feedback I’ve had has been that a sequel is wanted so I might see how it goes and do that. Or, I might go back to my original idea. So, yes is the short answer, just don’t ask me what!

Did you always want to be a writer?

I don’t think so. I wanted to be a vet! But I have always enjoyed doing a bit of writing and have tried a couple of times over the years to start a book but always gave up. I’m not particularly prolific with the story ideas so when I get one that comes to me that’s when I crack on with it. I can’t just sit in front of a blank screen and write randomly expecting something to come.

What good advice have you been given about writing?

Just do it! Is what it really comes down to. I’ve had so many people say to me, oh I’ve always wanted to write a book, and there are always excuses. If you want to, just do it – it’s as simple as that.

I don’t have any. If I’m not working or doing the usual domestic and life stuff I’m writing. I guess that is what I do in my spare time 😀

You have a collection of 1,000 books at home and are told you are only allowed to keep 3.  Which ones would you choose?

This would change on a daily basis – but right at this minute it would be A Shiny Coin for Carol Prentice by Mark Barry. He’s my editor, this is his latest book and it is terrific. I’ve read it once this year already but I would love to do so again. The Horse Whisperer by Nicholas Evans – I have a lifelong passion for horses and found this fascinating plus I cried at the end which definitely signifies a good book. And lastly, The Time Traveller’s Wife by Audrey Niffenegger – the last two I haven’t read for years and the details are sufficiently hazy that they are ready for me to enjoy all over again. But there are loads of others I’d choose on another day… couldn’t I just cheat and grab my Kindle instead? 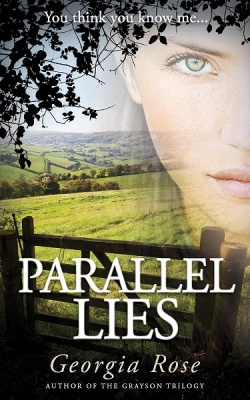 My name is Madeleine, Madeleine Ross. It is a name chosen with thought and because it is classy, and that is what is needed here…’

Madeleine Ross has life exactly as she planned it.

Company… when she wants it.

It’s an enviable existence for an independent young woman, and one she’s keen to protect.

Enter Daniel – strong, dependable and a danger to everything she’s built. He’s not something she was looking for, but hearts can’t be controlled and maybe, just maybe he might be worth letting into hers.

But, all is not what it seems. Because Madeleine is hiding a lifetime of secrets. Deep secrets.

And they never stay buried for ever.

Her darkest secret returns, like the proverbial bad penny. He is her first love, shadowy, dangerous, the baddest of bad boys. No matter how far she runs, or how well she hides, she can never escape him.

Here he is, on her doorstep, with a proposition she is powerless to resist but which could devastate the future she hoped to have.

Can Madeleine satisfy the old love while keeping the new?

You can’t always get what you want but, desperate to preserve the life she has worked so hard for, Madeleine is willing to risk everything to prove that she can.

But wait! There’s also a Giveaway for you to enter, should you wish!  Just click on the link below:-

Georgia Rose is a writer and the author of the romantic and suspenseful Grayson Trilogy books: A Single Step, Before the Dawn and Thicker than Water. A short story, The Joker, based on a favourite character from the series followed and is free to download from Amazon.

Her fourth novel, Parallel Lies, a standalone to be released on 12 September 2017, encompasses crime along with Georgia’s usual blending of genre.

Georgia’s background in countryside living, riding, instructing and working with horses has provided the knowledge needed for some of her storylines; the others are a product of her overactive imagination!

Georgia prefers silence to noise, and being socially inept likes to stay in rather than go out. She is thankful that she grew up in an age before online dating became a thing and before everyone carried a camera as at least all the horrifyingly embarrassing moments of her life can only replay in the confines of her own head.

Her busy life is set in a tranquil part of rural Cambridgeshire in the UK where she lives with her much neglected husband and dog. Their son, currently at university, comes and goes and their daughter, having delighted them all for long enough, has eventually moved out, got married, and is discovering the joys of being all grown up and having a mortgage!

Thank you for inviting me on your lovely blog, Sonya, it has been a pleasure to visit you and get to chat to your readers.

Like Loading...
Posted in Book Launches, Interviews and tagged crime and mystery, Georgia Rose, out on the 12th September 2017, Parallel Lines, romance