Blog Tour – ‘A Litany of Good Intentions’ by Andrew Harris 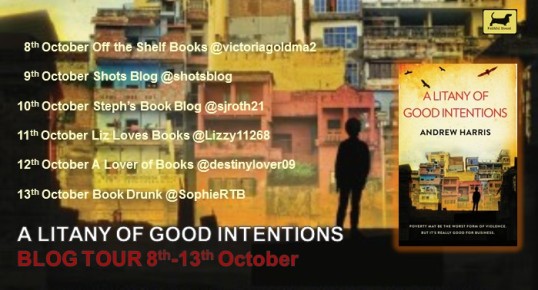 Congratulations to Andrew Harris whose new book ‘A Litany of Good Intentions’, the second of The Human Spirit Trilogy is out today, published by Faithful Hound Media.  I am delighted to be taking part in this blog tour for which Andrew has written a guest post, but first here’s what the book is about.

A thrilling, powerful and important story of a discovery that could change the world, that some would stop at nothing to keep hidden…

Leading oncologist Dr Hannah Siekierkowski and her partner Lawrence McGlynn are visiting New Delhi for a conference, and enjoying a well-earned break. By chance, they meet Lawrence’s old friend Toby and his passionate daughter Okki, a charity worker. She introduces them to the organisation Sanitation In Action, and its charismatic leader, the young Chinese philanthropist Jock Lim.

An end to world poverty is more than just a dream for Jock. Through his charity connections and his fiancée Nisha’s extraordinary scientific breakthrough, Jock has discovered a way to release 2.6 billion people from the imminent threat of death and disease. Caught up in their passion and energy, Hannah agrees to help present their project at a conference in Uppsala, Sweden.

But with the discovery of a dead body, they realise that someone will stop at nothing to prevent them from achieving Jock’s dream. As the clock ticks down to the conference, Hannah and Lawrence are drawn into a web of corporate greed, racial prejudice and a seething hatred of the new world order: a hatred that originates back in the Second World War, with even earlier links to Einstein’s general theory of relativity.

An urgent fast-paced thriller, about right and wrong, people versus profits, and the best of intentions pitted against the failings and greed of humanity, which fans of Robert Harris, John le Carre and Michael Cordy will love.

For most people, finding a cure for cancer or saving the world from poverty, would be a momentous achievement. For Dr Hannah Siekierkowski, CEO of New York’s own Klinkenhammer Foundation for Medical Research, it’s what she gets paid to do: just another day in the office.  Matthew Cox wanted to know how she was coping with so much media attention.

“Wealth is like sea water: the more we drink, the thirstier we become. The same is true of fame… for most people anyway. But for me? I’ve got other things to do.” She quotes Arthur Schopenhauer like he was her great uncle. Maybe he was – the European connections run deep in her family history, according to the official bio I’ve received.

The coffees arrive with a fanfare. She waits while the table is being laid out. Restless fingers continue to drum on her stylish black skirt. She checks her watch for the third time in as many minutes.

Is this making you nervous, I ask? I offer to turn off the recorder. She shakes her head briefly, flashing a tepid smile before her attention is caught by something going on behind me.

“I didn’t think this place really existed,” she continues, back with me, at least for now, “yet it’s only a few blocks from our office. Even the cab driver didn’t believe me.”

I’d chosen the location for our interview carefully. My boss said Number Sixty Nine was classy and discreet. There was no signage on the outside. Entrance was by keypad through an unmarked door in the back alley. My best friend said it was an upmarket knocking shop for the rich and famous when they were in town….well, Getting It Off Broadway’s what he actually said.

“How was Scandinavia? Good Conference?” I tried to get her talking about her recent trip. Her A-list status was pretty high before the live TV appearance from Sweden. What we all witnessed that day had shaken the world and rocketed her into the media stratosphere.

“Look, I know you’ve got magazines to sell. I have a copy in my apartment. And I know why people are interested in what I’ve been doing. But do they really want to know what razors I shave my legs with or how I take my coffee?” she smiles, warmer this time, sips another mouthful of espresso. “This is good by the way, thank you.”

She goes quiet. I’ve finally got her full attention. “This article will be syndicated into the business press and picked up by the pharmaceutical companies, the trust funds, the healthcare corporations, the investment bankers. They want to know if you can make a fast buck for them. If you can maximise the return on their investment, as they say. That’s what this is all about.”

She leans back into the sofa and pulls the cuff down over her watch. She looks me full in the face for the first time. I feel her warmth wrapping itself around me. Somehow I’ve crossed a threshold. What will come next will be from the heart. From the heart of a woman who has saved so many hearts from a lifetime of misery and suffering.

“Making money has become an obsession at the expense of really matters.” She holds up her hand before I have a chance to speak, “and before you jump in, I know, I’m just as much a part of a money-making machine. Our medical research could not continue without it.”

Her hands are running over the soft chintzy material. She’s starting to relax.

“Lawrence was right. There never was an economic argument against slavery.” Any pretence at playing the media game has now gone. This was the person I really wanted to meet.

“People used to be more religious, more connected to a spiritual world of right and wrong, of good and evil. It wasn’t economics that led to the abolition of slavery. It was the moral argument. Nowadays, the moral argument has been washed away in a world of accountancy, financial investment, banking….a world of purely making money.”

Lawrence was the new man in her life. Her Head of Diabetes Research at the Foundation: he was also her partner, her live-in lover. Her colleagues told me she had taken fierce criticism over his appointment. Lawrence was under-qualified for the job. He’d had no previous medical training. Accusations of favouritism were thrown at her. It had been a challenging year, she pointed out.

“We have lost touch with our own humanity. People have become resources again to be bought and sold. Even in my own world of medical research, we are developing more and more profitable drugs to treat disease rather than trying to find out what causes the disease in the first place or how to prevent it.

She tells me that Alexander Fleming never profited out of the discovery of penicillin. The most important medical breakthrough in our history was his gift to world, she explains. Such an act of human kindness today would be unthinkable. What’s changed, she continues, is our attitude. For Fleming, it was about how he could save lives. Today is about me and how I can benefit financially, often at the expense of others.

“I can’t change the world. But I can lead by example. I feel very privileged to be who I am.” She checks her watch again. Times up. The ordeal is over. Her media obligation is fulfilled. We shake hands.

And one last question. What about the future? Her work in finding a cure for Type 1 and Type 2 Diabetes is reaching a tipping point, so her PR agency reports. Would she like to comment?

The smile says it all. I’ll have to wait. We’ll all have to wait until she is ready to tell us. She may be a reluctant celebrity but I’m hooked – she is one fascinating, enigmatic woman.

Andrew Harris moved from the United Kingdom to New Zealand in 2008. He was born in Liverpool, survived a grammar school education and graduated with a first class honours degree from the University of Leeds. He had a successful career in people management before running his own executive search consultancy. In this capacity, he travelled extensively and has been privileged to meet some remarkable and influential characters around the world.

One of his passions is crime fiction. Andrew strongly believes this genre provides the perfect vehicle for stimulating debate and challenging the status quo. He writes thrillers with a social conscience, putting fictional characters in real life situations.

A Litany of Good Intentions is the second book in Andrew’s The Human Spirit Trilogy, a series of thrillers with a social conscience based on exciting scientific discoveries in medicine, physics and biology. The second book follows The C Clef, published in April 2016 and available on Amazon.

In The Human Spirit Trilogy, Andrew combines the factual world of science with pacey, action-packed thrillers to explore urgent questions faced by humanity. Why isn’t there a cure for cancer? How do we end world poverty? What will eradicate addiction? How are we going to feed 9 billion people without destroying our precious planet?

‘A Litany of Good Intentions’ is available to buy from Amazon UK:-