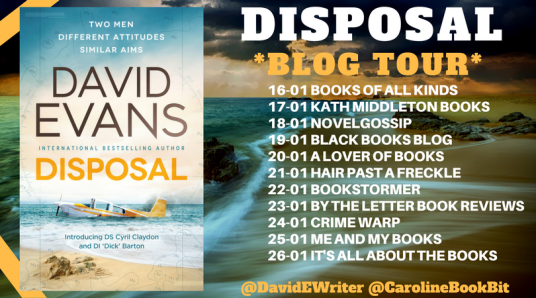 ‘Disposal’, the first book in the Tendring series, was published on the 16th January 2018 by Orchard View Publications. I was invited to take part in this blog tour by the lovely Caroline Vincent of Bits about Books. I would like to thank both Caroline and the author, David Evans for my review copy of the book. Read on to find out what my thoughts were.

It’s August 1976, one of the hottest summers on record. Early one morning at Clacton on the north Essex coast, a light aircraft takes off from the airstrip but struggles to gain height and crashes into the sea. First on the scene is Sergeant Cyril Claydon. Pulling the pilot’s body from the wreckage, he makes a very grim discovery indeed. A series of events puts Cyril and others in danger as he is drawn into the investigation, having to work alongside DI ‘Dick’ Barton, a man with totally alien attitudes. The important question is will they be able to work together?

This year I am aiming to read a number of new series, so I was delighted to be given the opportunity to participate in the blog tour for ‘Disposal’. Though this was a very enjoyable read, I have to say that it did take me a bit of time to really get into the story. For me personally things started to hot up once the second body was discovered and from then on I was hooked. I liked David Evans’ style of writing, the short chapters and the plot.

I met a number of characters along the way. I wasn’t really all that keen on DI Barton at the start and I could see exactly why he had been given the nickname ‘Dick’. As I got further into the story though he somehow started to grow on me. I was most interested in seeing how he and DS Cyril Claydon got on together workwise. I liked Cyril from the beginning. He was a really good DS and he was very methodical in his thinking. Throughout the story the reader gets to learn a bit about his past and his personal life. I really felt for Cyril and I hoped that he would find true happiness. Cyril’s neighbour Doris was absolutely adorable. She was just so lovely and caring. She’s the sort of neighbour we could all do with. I don’t think Doris realised just how much help she was with regards to the investigation either.

I didn’t really know who to trust at one point. There were several people who could easily have been responsible for the murders. The author kept me guessing which was a good thing. I was also very interested in learning about police procedurals in the 1970s.

A promising start to this series, I am really looking forward to reading the next book.

Hopefully my review has left you wanting to read this book.  ‘Disposal’ can be purchased from:-

David Evans is a Scots-born writer who found his true love as well as his inspiration for his detective series, set primarily in Wakefield. Having written all his life, in 2012 he decided to go for it – successfully as the next year, in 2013, he was shortlisted for the CWA Debut Dagger Award.

The Wakefield Series became an International Bestseller in June 2017 with success in Canada and Australia as well as the UK. But now, whilst the Wakefield Series awaits the next instalment, David Evans has written Disposal, the first in the Tendring Series, a completely new detective series set in north Essex in the 1970s.