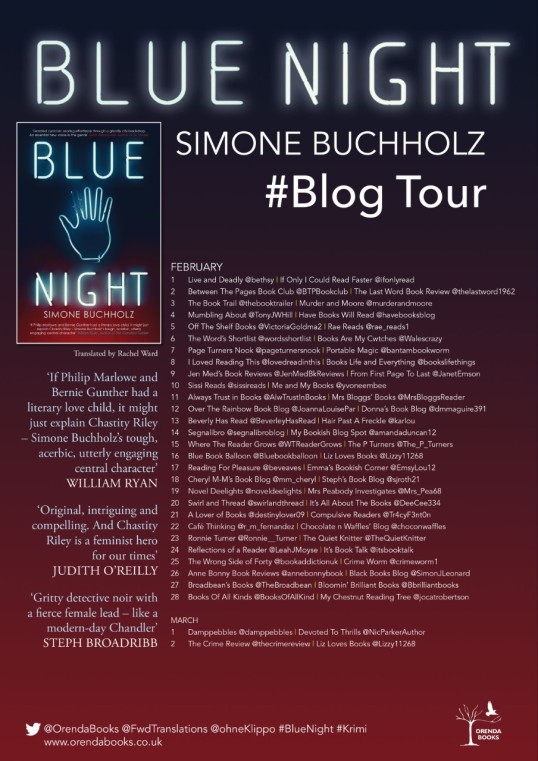 ‘Blue Night’ is the first book in a brand new series. It was published as an eBook last December by Orenda Books and is out on the 28th February in paperback. Today it is my turn on this blog tour along with another blogger. I would like to thank Anne Cater of Random Things Through My Letterbox for inviting me to take part. Thanks also to Anne and Karen Sullivan for my review copy of this book.

After convicting a superior for corruption and shooting off a gangster’s crown jewels, Chastity Riley’s career as a hard-bitten state prosecutor has taken a nose dive. She has been transferred to the tedium of witness protection to prevent her making any more trouble. However, when she is assigned to the case of an anonymous man lying under police guard in hospital, with almost every bone in his body broken and a finger cut off and refusing to speak in anything other than riddles, Chastity’s instinct for the big, exciting case kicks in.

‘Blue Night’ has been translated by Rachel Ward. Set in Hamburg this is a gritty and exciting story. It has been well written with some catchy chapter headings. I really like the author’s way with words and her descriptions. At the end of each chapter the reader gets to meet several different characters and finds what has been going on through them, leading up to current events. It certainly makes for interesting reading.

When Chastity Riley is given the case of a man who has been admitted to hospital having had his bones broken and a finger cut off, she doesn’t know exactly what she is taking on. He is giving virtually nothing away and Chastity finds that she has her work cut out, but then he does start talking a bit and gives her a clue as to what’s going on. Chastity finds herself being led her into the dark world of drugs and what she sees isn’t exactly pretty. With the help of Wieczorkowski, a narcotics officer, and her colleagues they will hopefully be able to stop something big.

I liked Chastity from the very beginning and I think we all could do with someone like her in our lives. She’s not had it easy and it’s obvious that she has suffered a lot in the past, but she’s not given up. She’s got a lot of fight in her and is one gutsy lady.

A promising start to a new series, I am looking forward to reading more by this author and finding out what Chastity gets involved in next. 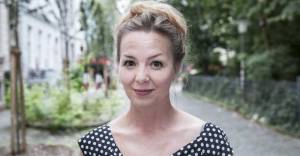 Simone Buchholz was born in Hanau in 1972. At university, she studied Philosophy and Literature, worked as a waitress and a columnist, and trained to be a journalist at the prestigious Henri-Nannen-School in Hamburg. In 2016, Simone Buchholz was awarded the Crime Cologne Award as well as runner-up for the German Crime Fiction Prize for Blue Night, which was number one on the KrimiZEIT Best of Crime List for months. She lives in Sankt Pauli, in the heart of Hamburg, with her husband and son.