I am delighted to welcome Claire Boley to my blog today.  Her novel, ‘If Only I’d Listened’ was published last year in paperback and as an eBook by Olympia Publishers.  Claire has written a lovely guest post which I really hope you enjoy reading.

First I must thank Sonya for hosting my guest post and to say that I have never met her in person but on social media she comes over as a very approachable lady who has been kind enough to do a post about me and my second book which is my debut novel. The first book I wrote was a craft book which I was commissioned to write in 2011, title Hand Spinning and Natural Dyeing.

When I was at secondary school and in between lessons while waiting for the teacher to arrive I used to make up stories for my school mates who enjoyed sitting and listening to me telling them.

It was not until I retired from nursing that I thought about writing and decided the best way to start was to write articles for magazines which I did for a number of years on different subjects including hand spinning, natural dyeing, pottery, gardening to name just a few. After a year of writing articles I was approached by The Good Life Press to write my first book.

My debut novel – If Only I’d Listened is based in 60s’ London when 16 year old school girl Samantha Smithson gets pregnant by her 6th form boyfriend Peter Knight in an era when pregnancy outside of marriage and especially when still at school carried a stigma.

The reason the story of Samantha and Peter is based in London is because I lived there from 1964-68 and know different areas well. I wrote about a school girl getting pregnant as I was a nurse in London in this era and heard quite a lot about pregnancy outside of marriage and how it upset family life.

Samantha spent most of the nine months in and out hospital due to high blood pressure caused by her parents behaviour over the pregnancy and not wanting Samantha to live with them once she had become pregnant – they felt that Peter’s parents should look after her and take full responsibility for her. All of this upset Peter’s mother and made her ill.

Peter spent his time going out and about in the West End of London to pubs and clubs and was encouraged by his mates to get drunk and meet other girls, all of this was in between studying for his A levels which he lost interest in.

There may be a sequel to If Only I’d Listened this won’t be until I have finished my second novel – False Teeth. 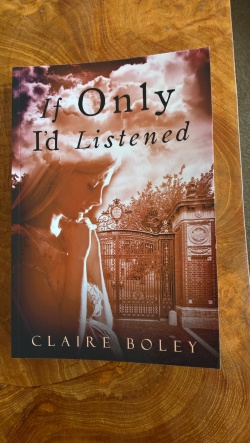 IS YOUR GIRLFRIEND PREGNANT? How ready are you for that? How would you deal with becoming a parent before you’ve left school? One thing’s for sure, you can’t unmake babies. A fact that’s borne in on Peter Knight and Samantha Smithson, sixth formers at the South East Comprehensive in Deptford, living at a time when many parents are still of the old school and pregnancy outside marriage carries a stigma. Having to face their parents, their school friends, teachers and gossip is only the beginning. Pete’s plans for university are scotched as he must seek work and accommodation suitable for a young family. And all the time he still wants to have fun, with friends’ quite happy to tempt him to do it. As for Samantha, abortion is no easy option. Yet as her health and her faith in Peter goes up and down, she may have to think the unthinkable.

‘If Only I’d Listened’ is available from Amazon UK – http://amzn.to/2vG4AvX

I was born in Exeter during the war. Aged five my parents and I moved to Buckinghamshire where my father worked at Bletchley Park.

While at school in Aylesbury and in between lessons I used to tell stories to my school mates, looking back this must have been the beginning of my story telling. After leaving school I left home to train as a nurse so the stories went on the back burner until I retired.

One afternoon I visited W H Smith and read an article written by a friend and decided that perhaps I could write. From that day I have been writing articles on different subjects – hand spinning, pottery, gardening, natural dyeing and also cooking for many national magazines. In 2011 I was commissioned and given an advance to write my first book – Hand Spinning and Natural Dyeing. After finishing this book I decided to see if I could write a novel – it took three years. Once it was completed I soon found a publisher.

My debut novel – If Only I’d Listened is a family saga based in 60s London. Samantha Smithson a 16 year old school girl gets pregnant by her 6th form boyfriend – Peter Knight, in an era when pregnancy outside of marriage carried a stigma. Having to explain to their parents, school friends and teachers about the pregnancy is just the beginning for Samantha and Peter. Along the way Peter is encouraged to go out and about enjoying himself with his mates in between studying for his A levels while Samantha spends most of the pregnancy in and out of hospital getting more and more upset by Peter.

Like Loading...
Posted in Guest Blog Posts and tagged 1960s, Claire Boley, family saga, If Only I'd Listened, Olympia Publishers, pregnancy, pregnancy outside of marriage, set in London, stigma | Leave a comment