‘Friends and Traitors’, the latest book in the Inspector Troy series, was published on the 5th April 2018 by Grove Press and is available in hardback, paperback and as an eBook.  I was invited to take part in this blog tour by Ayo Onatade.  I have an extract for all of you, but first here’s what the book is about. 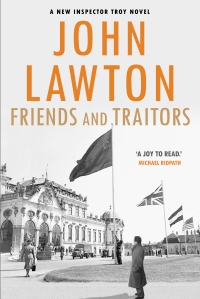 It is 1958. Chief Superintendent Frederick Troy of Scotland Yard, newly promoted after good service during Nikita Khrushchev’s visit to Britain, is not looking forward to a Continental trip with his older brother, Rod. Rod was too vain to celebrate being fifty so instead takes his entire family on ‘the Grand Tour’ for his fifty-first birthday: Paris, Siena, Florence, Vienna, Amsterdam. Restaurants, galleries and concert halls. But Frederick Troy never gets to Amsterdam.

After a concert in Vienna he is approached by an old friend whom he has not seen for years – Guy Burgess, a spy for the Soviets, who says something extraordinary: ‘I want to come home.’ Troy dumps the problem on MI5 who send an agent to debrief Burgess – but when the man is gunned down only yards from the embassy, the whole plan unravels with alarming speed and Troy finds himself a suspect.

As he fights to prove his innocence, Troy discovers that Burgess is not the only ghost who has returned to haunt him…

It was past midnight when Burgess staggered to the door.

“What say we meet over Christmas?”

“Fraid not, Guy.  I’m leaving for Berlin as soon as I can get a flight.  The air corridor is rather crowded at the moment as you may imagine.”

Troy was never going to answer that.

Burgess stood in the doorway looking up at a clear, cold winter sky.

“No raid tonight.  Makes a change.”

“The war’s been over three years, Guy.”

He twitched.  Shook his head as through trying to dislodge an insect from his hair.

“Eh?  What?  Bloody hell, so it has.  Must be more pissed than I thought.  Who’d ever have thought we’d end up missing the war?  Hot war …cold war …that’s a joke …this isn’t a cold war …it’s a lukewarm egg custard of a war.”

Burgess trundled off down the yard towards St. Martin’s Lane, to the corner where Ruby the Prostitute had stood until a matter of weeks ago–unsteady on his feet, happy as a newt.

If there really had been a raid on, Troy would have left him on the sofa under an eiderdown rather than booting him out on a cold December night.  But there wasn’t.  There might never be again, and Troy saw no reason to take him in.

As Burgess turned the corner Troy wondered if, this time, he might actually have seen the last of him.

Has this extract left you wanting to read more?  ‘Friends and Traitors’ is available to buy from Amazon UK:-