It is a real pleasure to be taking part in this blog tour today.  A couple of months back I helped with the cover reveal and I really liked the sound of this book and somehow just knew that I had to read it.  ‘The Seagull’s Laughter’ is being published in paperback on the 7th November 2019 by Wild Pressed Books.  I would like to thank Kelly Lacey of Love Books Tours for inviting me to participate in this tour and both the publisher and Kelly for my review copy.

I will tell you in a minute what I thought about ‘The Seagull’s Laughter’.  First though here is the book blurb.

Born in 1973 to a Greenlandic mother and an English-Explorer father, Malik has always been something of a misfit. He has one black eye and one blue. As a child his mother’s people refused to touch him and now his own baby daughter’s family feel the same way.

On his own now, Malik’s only companion is a guiding spirit no-one else can see, but one day a white man with a nose like a beak and a shadow like a seagull appears on his doorstep and invites him to England.

Martha has had enough of living with domestic abuse. She compares bruises with her friend Neil, who regularly suffers homophobic attacks. With Martha’s baby, they go on the run to Shetland, where Martha has happy childhood memories of summers spent with her aunt.

On their way up north in a camper van, they come across a dejected Malik, alone again after a brief reconciliation with his father’s family.

They arrive safely together in the Shetland Isles, but Malik still needs answers to the identity of the beak-nosed man who casts a shadow over his life, and must now embark on a further journey of his own.

The Seagull’s Laughter is an immersive read, intertwined with nature and the magic of Greenlandic folk tales.

I thoroughly enjoyed ‘The Seagull’s Laughter’. The author has written such a wonderful story and I thought it was simply sublime. The descriptions throughout including of Greenland were magical. I really liked how the story was set out and thought that it worked very well indeed.

Split into parts, this story is told by Malik, Rasmus and Martha. I was mesmerised by it, especially Malik’s tale and I found myself following him throughout his journey from Greenland to England. He had so many different experiences and these shaped him to grow as a person. Everything that happened to him was for a reason.

There were a number of interesting characters throughout the story. As well as Malik, I liked Martha and her Auntie Jeanie a lot as well. I was also very interested in Malik’s helping spirit who was there to guide him.

I took an instant dislike to Birdie although if it hadn’t been for him Malik might not have made a better life for himself.

I was totally hypnotised by the story and didn’t want to stop turning the pages. I loved the folk tales and felt as if I was there listening to them. I had a good idea about what would happen in the end and I was so happy when it did.

‘The Seagull’s Laughter’ is an enchanting and beautifully told story which you will not want to put down.

‘The Seagull’s Laughter’ can be pre-ordered from Amazon UK:- 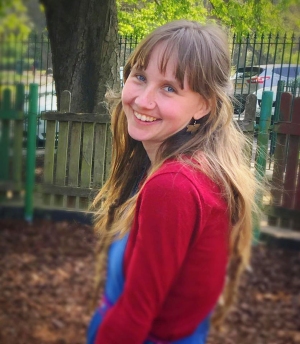 Holly grew up in Derbyshire but has always been drawn to the sea. She has written from a young age. Her love affair with island landscapes was kick-started on a brief visit to the Faroe Islands at the age of eighteen, en route to Iceland. She was immediately captivated by the landscape, weather, and way of life and it was here that she conceived the idea for her first novel, The Eagle and The Oystercatcher.

Holly studied Icelandic, Norwegian and Old Norse at University College London. She also studied as an exchange student at The University of Iceland (Háskóli Íslands) and spent a memorable summer working in a museum in South Greenland.

She decided to start a family young, and now has three small children. Holly helps run Life & Loom, a social and therapeutic weaving studio in Hull.  She likes to escape from the busyness of her life by working on her novels and knitting Icelandic wool jumpers.

The Seagull’s Laughter will be published in November 2019.