I am absolutely thrilled to be taking part in this blog tour today.  ‘A Dark Matter’ by Doug Johnstone is the first book in the Skelfs series.  It is being published in paperback on the 23rd January 2020 by Orenda Books and is also available as an eBook.

I would like to thank Anne Cater of Random Things Tours for inviting me to participate in this tour.  Thanks also to the publisher for my review copy of this book.

I will tell you all in a minute what I thought about ‘A Dark Matter’.

After an unexpected death, three generations of women take over the family funeral-home and PI businesses in the first book of a brilliant, page-turning and darkly funny new series.

The Skelfs are a well-known Edinburgh family, proprietors of a long-established funeral-home business, and private investigators. When patriarch Jim dies, it’s left to his wife Dorothy, daughter Jenny and granddaughter Hannah to take charge of both businesses, kicking off an unexpected series of events.

Dorothy discovers mysterious payments to another women, suggesting that Jim wasn’t the husband she thought he was. Hannah’s best friend Mel has vanished from university, and the simple adultery case that Jenny takes on leads to something stranger and far darker than any of them could have imagined.

As the women struggle to come to terms with their grief, and the demands of the business threaten to overwhelm them, secrets from the past emerge, which change everything… It’s a compelling and tense thriller and a darkly funny, warm portrait of a family in turmoil.

It has been a long while since I have read anything published by Orenda Books but this year I will be changing that for sure.

I totally loved ‘A Dark Matter’ and I am so very happy that this is the start of a new series otherwise I would probably be in mourning by now. This is the first book by Doug Johnstone I have read, and I am seriously impressed. What an ingenious storyline. The writing flowed easily, and I was able to follow the story without any problem. I also liked the way the chapters were set out.

I found this to be an extremely dark and intriguing read. The further I got into the book the more addicted I became. There were shocks and surprises aplenty throughout. There just seemed to be so much going on and it was really interesting to see how things unfolded. The author kept me guessing which was a good thing.

This story is narrated by the main characters Dorothy, Jenny and Hannah; three generations of a family. I thought this worked really well. They all came across as very strong women. Despite the grief they were understandably going through they took hold of the reins and kept both businesses going between them.

I really liked the main characters. My other favourite was Indy who was such a lovely and caring person.

You would think that reading about a funeral-home business and death would be morbid, but it actually wasn’t. It anything it was fascinating and thought-provoking if not a bit grisly at times.

I will definitely be reading more of Doug Johnstone’s books and am already really looking forward to the second book in the series. I can’t wait to find out how the Skelf family are getting on.

I highly recommend you read ‘A Dark Matter’.

‘A Dark Matter’ is available to pre-order/buy from Amazon UK:- 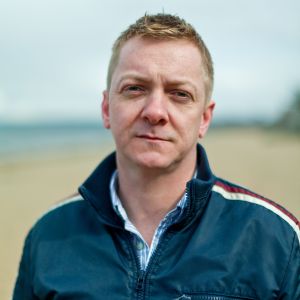 Doug Johnstone is the author of ten novels, most recently Breakers (2018), which has been shortlisted for the McIlvanney Prize for Scottish Crime Novel of the Year. Several of his books have been bestsellers and award winners, and his work has been praised by the likes of Val McDermid, Irvine Welsh and Ian Rankin. He’s taught creative writing and been writer in residence at various institutions – including a funeral home – and has been an arts journalist for twenty years. Doug is a songwriter and musician with five albums and three EPs released, and he plays drums for the Fun Lovin’ Crime Writers, a band of crime writers. He’s also player-manager of the Scotland Writers Football Club. He lives in Edinburgh.