Archive for the category “Polls”

‘The First Lie’ Cover Poll – Thank You from Virginia King 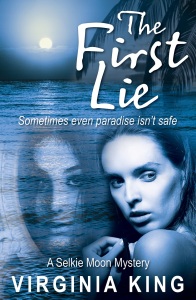 Last month I did a poll for Virginia King to see which book cover people preferred.  To see the original post please click on the link below:-

The overall winner was the second cover (above).  I also ran a competition in which one person who commented would win an ebook copy of ‘The First Lie’.  Virginia has written a thank you post for everyone who took part in the poll.

A warm thank you to everyone who voted in the cover poll for The First Lie – and a very special thank you to Sonya at A Lover of Books for hosting and managing the poll.  Sonya continues to support authors like me in very practical ways.

The quality of the responses to the cover poll was very high, so I have chosen two winners to receive a copy of the ebook (see below).  Authors really need honest feedback from readers and other authors about such elements as book covers, because they are so important in attracting new readers.  A quality cover is the first indication that the book is well-written and worth investing time and money in.  I’ve written a little about my cover journeys below.

Does the Cover Tell a Story?

I love the old cover of The First Lie, which is a section from a painting called Watching by artist Lindena Robb (http://www.lindena-robb.com.au).  Some voters noted the quality of this image as a work of art – I agree.  I thought it would be a winner at attracting readers.  But when The First Lie hit the bestseller list in Psychic Suspense and there was no spike in new sales, I wondered if the cover was the problem.  The First Lie has a lot of positive reviews but if readers don’t click on the cover they won’t get to read them.  I got feedback from book reviewers that this cover doesn’t “tell a story”, so doesn’t invite the reader to explore further – and get to the book description and reviews.  Boo hoo!

Reflecting the Genre without Being Clichéd

The new cover is the result of an exhaustive design process by Julia Kuris at Designerbility (http://www.designerbility.com.au).  The First Lie is a psychological mystery/thriller with a touch of the mythical, set in Hawaii.  Julia took note of many of the elements in the book and its genre and produced nine cover concepts – an awesome choice!  We rejected some as too YA and others as not mystical enough or too clichéd.  Others didn’t communicate the island setting.  By gauging the WOW response from readers and feedback from my editor, I selected the concept that has become the new cover.  Thank you to people who commented that it might be a little clichéd.  It’s difficult to place a book firmly in its genre and keep the image fresh.  The limited colour palette catches the eye and, as other voters noted, it reflects the psychological and mystical elements in the book, as well as the setting.  Julia was also working with a series “look” in mind – she’s creating concepts for Book Two at the moment.  Exciting!

I’ve chosen Paul and Kendra to win an ebook copy of The First Lie.  Their comments reflect thoughtful consideration of the issues I’ve grappled with.  Many thanks.

I think the second cover, which I voted for, is the most commercial. i.e. most likely to entice people to buy. But I still like the original cover for its own sake and think it is the most interesting artistically.

I chose the second cover because of the water and reflection of two different faces. I found this image both disturbing and intriguing, which is how I expect to feel when reading a psychological mystery/thriller. Good luck!

‘The First Lie’ is available from Amazon.

Website:  Virginia blogs about writing and book matters at http://www.selkiemoon.com/

Virginia King is the author of ‘The First Lie’.

What if the truth was hidden where you’d never ever find it?

When Selkie Moon reclaims the name her mother gave her, she unwittingly triggers a series of events so bizarre, she’s forced to delve into the murky depths of the past and face the shocking truth about herself.

‘The First Lie’ is a multi-layered psychological/mystery thriller.  As you can see above two covers have been designed for this book, the second one being the new one.  Virginia King would love to know peoples opinions of the covers.  Which cover image best reflects this genre and would make you click on it to find out more?

Vote in my poll below:-

Virginia King is offering a copy of her book (ebook) to one lucky person.  To enter this competition just leave a comment below about the covers, i.e. the designs, why you prefer the one you do etc.  Virginia will then pick a winner.

With so much technology out there giving you various ways in which to read books I was wondering which you prefer?

I have a kindle which is very useful and convenient as I can take it anywhere with me.  It also saves space as you can have loads of books on there.  However, I cannot imagine being without hardbacks or paperbacks.  A bookcase filled with books makes a home look rich.

I love the feel of books and being able to turn the pages rather than just press a button.  I like physically seeing how much progress I have made each day.   I collect bookmarks and like being able to use them regularly.

I could spend hours wandering around Waterstones and other bookshops admiring the large number of books in stock.

Even though I have a kindle I still get loads of books.  Most of the time I have at least two or three on the go at the same time, one of which has always got to be either a paperback or hardback.  The good thing with books is that at least the battery doesn’t run out.

Below is a poll about e-Readers and books.  Feel free to comment as well.