Archive for the tag “Black Wood” 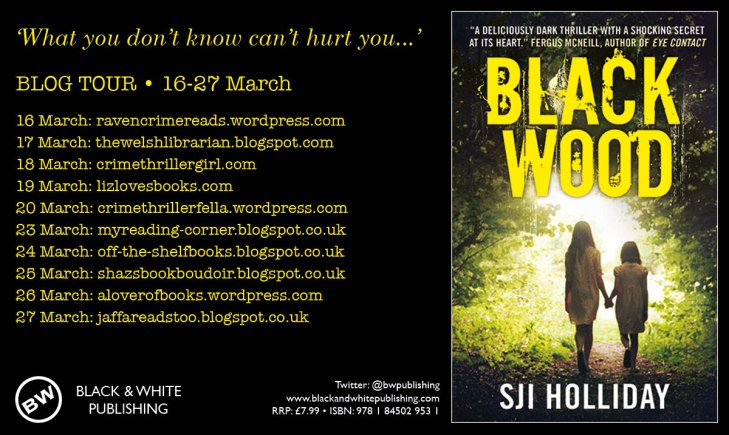 ‘Black Wood’ is SJI Holliday’s debut novel.  It was published by Black and White Publishing in paperback on the 19th March 2015.  I have been hearing a lot about this novel and was really looking forward to reading it.  As part of this blog tour I have written a review.

As young girls Claire and Jo had a very nasty experience which would change their lives for good.  It happened while they were in the woods resulting in Claire being paralysed for life and Jo being left with deep mental scars from which she had never totally recovered from.

Twenty-three years later and Jo gets a shock when a customer walks in to the bookshop where she is working.  There is something so very familiar about him and Jo is convinced that she has seen him before  Elsewhere, Sergeant Davie Gray is investigating reports of a man wearing a balaclava who is apparently attacking young women on a disused railway.  This comes as a shock to the residents of Banktoun, a small and quiet town where crime very rarely occurs.  Is there a connection between the man from the past and the one going around scaring young women?

I found ‘Black Wood’ to be intriguing right from the start and couldn’t wait to read more.  It was thrilling and fast-paced.  I really like the way SJI Holliday writes.  The story goes back and forth from the past to the present which I thought worked well. The majority of the chapters are very short and have been written in such a way that you are left in suspense waiting to find out what happens next with a particular character.  It’s a bit like someone tantalising you with a bar of chocolate whilst opening it really slowly.

The author described the old cottage where Jo’s grandmother had lived so well that I could almost feel the chilling atmosphere.  Maybe some of what went on in there was in Jo’s mind with all the anguish she was going through, but I think there was definitely more to it.

‘Black Wood’ is a dark and disturbing story with a number of shocking revelations.  For fans of crime fiction this is a must read.

I am looking forward to seeing what SJI Holliday comes up with next.

SJI Holliday has kindly written a guest post for me.

When A Character Calls

When I first started plotting Black Wood, I had it planned in my head as a fairly straightforward, linear tale of obsession; written in first person, by the deeply flawed protagonist, Jo. It was a tale of revenge, and Jo was going to tell it all by herself.

A few chapters in, and I was already starting to panic that Jo was too dark, too intense. There were plot points that had to happen to see the story through, and it soon became obvious that Jo couldn’t tell the story alone.

The thing about writing in first person is that you can follow the character on a journey, you can get right into their head – you might feel like they’re carrying you on their shoulders as they lead your through the story. But there are limitations. You can only see what they see, and you can only know what they know – unless you force things in – things that sometimes work, and sometimes don’t – such as the character being told things in dialogue by others, or the character finding a letter or a diary. There are many ways, but I was struggling to find the best way.

I realised I needed to lift the reader out of Jo’s head a bit – give them some respite from her unravelling thoughts.

So in walked Sergeant Davie Gray.

Well, he didn’t walk, actually. He was sitting in a police station, bored out of his tree, playing wastepaper basketball with his colleague. A phone call from their boss takes him away from his chair and out into Banktoun, a place where nothing ever happens… except when it does. He walks smack into Jo, and it soon becomes clear that the two of them have some history – but maybe not in the way you might think.

I can hardly just ignore him now, can I?