Archive for the tag “conspiracy thriller” 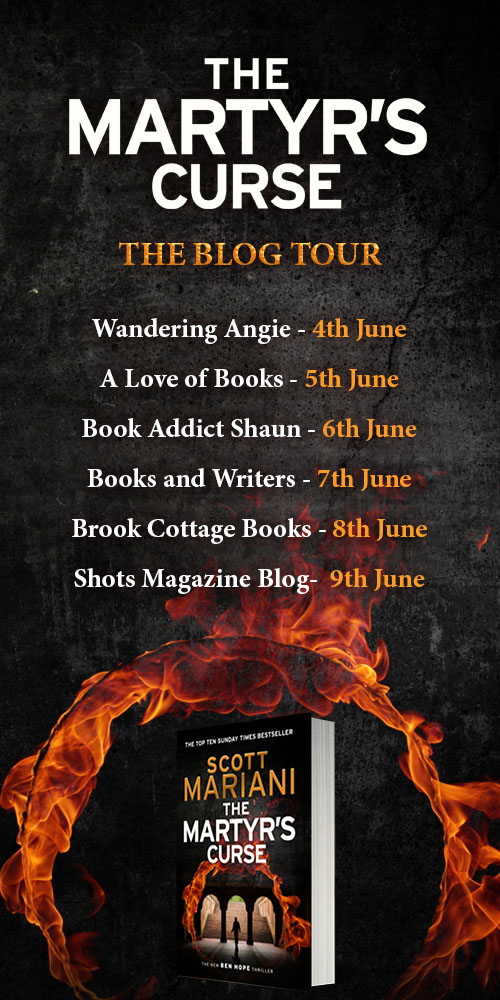 Scott Mariani’s latest book, ‘The Martyr’s Curse’ was published in paperback and eBook on the 4th June 2015.  Today it is my turn on the blog tour to celebrate its release.

Can Ben Hope find peace at last in a remote medieval monastery in the French Alps? His wanderings through Europe might have led him to this refuge but salvation is to be short lived for wherever he goes, trouble is never far behind.

When a team of merciless killers invade his newfound sanctuary and slaughter the innocent monks, Ben’s revenge quest quickly draws him into a bewildering mystery of stolen treasure, deception and murder.

What is the truth behind the cache of gold bullion apparently hidden for centuries under the monastery? What is the significance of an ancient curse dating back to a cruel heretic burning in medieval times? What are the real ambitions of the enigmatic leader of an organisation of doomsday ‘preppers’ calling themselves Exercitus Paratorum: the Army of the Prepared?

As he works to unravel the mystery, Ben is confronted with a terrifying reality that threatens to devastate the world and reshape the whole of our future. The race is on to prevent the ultimate disaster and there’s only one man who can save us. His name is Hope, Ben Hope.

Below is an extract from ‘The Martyr’s Curse’.

The crowd looked on in awed silence as the pall of smoke drifted densely upwards to meet the falling sleet.

Four attempts to light the pyre had finally resulted in a dismal, crackling flame that slowly caught a hold on the pile of damp hay and twigs stacked up around the wooden stake at its centre. So thick was the smoke, the people of the mountain village who’d huddled round in the cold to witness the burning could barely even make out the figure of the man lashed to the stake. But they could clearly hear his frantic cries of protest as he writhed and fought against his bonds.

His struggles were of no use. Iron chains, not ropes, held him tightly to the thick wooden post. Rope would only burn away, and the authorities overseeing the execution wanted to make sure the job was properly carried out – that the corrupted soul of this evil man was well and truly purified in the cleansing flames.

He was a man of indeterminate age, thin, gaunt and known locally as Salvator l’Aveugle – Blind Salvator – because he had only a right eye, the left a black, empty socket. The robed and hooded traveller had first turned up in the village in late November. He’d declared himself to be a Franciscan priest on a lone pilgrimage to Jerusalem, where almost for the first time since its fall to the Muslim forces of Salah al-Din in 1187, Christianity was re-establishing a lasting foothold. Salvator’s mission was to join his fellow Frenchman and Franciscan, Roger Guérin of Aquitaine, who had managed to purchase from the current Mamluk rulers parts of the ancient city, including the hallowed Cenacle on Mount Zion, and was in the process of building a monastery there.

But Salvator’s long journey hadn’t started well. He’d scarcely covered eighty miles from his home in Burgundy before a gang of brigands had beset him on the road, taking his nag and the purse containing what little money he had. Bruised and battered, he’d plodded on his way on foot for a month or more, totally dependent on the goodwill of his fellow men for shelter and sustenance. Finally, fatigue and hunger combined with the growing winter cold and the unrelenting rain had brought on a fever that had nearly ended his pilgrimage before it had properly begun. Some children had come across him lying half-dead by the side of the path that wound up through the mountain pass a mile or so from their village. Seeing from the dirty tatters of his humble robe that he was a holy man, they’d run to fetch help and Salvator had soon been rescued. Men from the village had carried him back on a wagon, he’d been fed and tended to, and fresh straw bedding had been laid down for him in an empty stable that he shared with some chickens. During the weeks that followed, the priest’s fever had passed and his strength had gradually returned. By then, though, winter was closing in, and he’d decided to delay resuming his journey until the spring. To begin with, most of the villagers hadn’t objected to his remaining with them two or three more months. It was an extra mouth to feed, true; but then, an extra pair of hands was always useful at this hard time of year. During his stay, Salvator had helped clear snow, repair storm damage to the protective wall that circled the village, and tend to the pigs. In his free time, he’d also begun to draw a crowd with his impromptu public sermons, which had grown in frequency and soon become more and more impassioned.

‘The Martyr’s Curse’ can be bought from Amazon UK:-