Archive for the tag “controlling marriage”

‘The Storm’, Amanda Jennings brand new book, is being published on the 23rd July 2020 by HQ.  It will be available in paperback, eBook and Audiobook.

I am absolutely delighted to be participating in this blog tour along with a number of fellow book bloggers.  I would like to thank the publisher for the invitation to take part and for my review copy which I got from NetGalley.

You will find out in a minute what I thought about ‘The Storm’.  Let’s have a look at the book blurb first though. 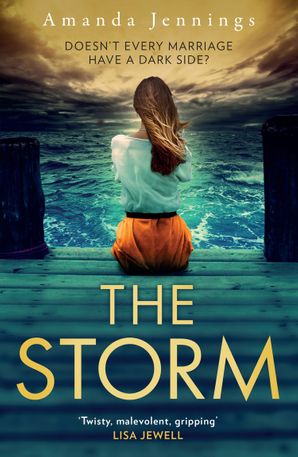 Doesn’t every marriage have a dark side?

‘Her best novel yet… Twisty, malevolent and gripping’ Lisa Jewell, No. 1 bestselling author of The Family Upstairs

To the outside world Hannah married the perfect man. Behind the closed doors of their imposing home it’s a very different story. Nathan controls everything Hannah does. He chooses her clothes, checks her receipts, and keeps her passport locked away. But why does she let him?

Years before, in the midst of a relentless storm, the tragic events of one night changed everything. And Hannah has been living with the consequences ever since. Keeping Nathan happy. Doing as she’s told.

But the past is about to catch up with them.

Set against the unforgiving backdrop of a Cornish fishing port in the ‘90s, this is a devastating exploration of the power of coercive control in a marriage where nothing is quite as it seems…

‘The Storm’ is a beautifully crafted book with a prologue which entices you to read on.  I absolutely loved the style in which this book was written.  It was well presented and very descriptive.

A family drama set in Cornwall, this story is narrated mostly by Hannah and occasionally by her husband, Nathan.  As the story starts to unfold the reader learns about Hannah’s past and the terrible tragedy which would change hers and others lives forever.  Although this was not a fast-paced story it was full of suspense and it had me trying to work out what had happened.

Appearances can be deceptive, and this was definitely the case for Hannah.  To the outside world she appeared to have the perfect marriage with a doting husband who provided for her and who was a pillar of the community.  Their marriage was in fact claustrophobic.

I really did not like Nathan at all.  He was a horrible character, almost sadistic.  Having said that I do believe that in his own way he loved Hannah even though he had a very strange way of showing it.  As the man of the house he liked to feel that he was in charge.  He was very controlling and the way he treated Hannah and their son was verging on mental abuse.  I was shocked at the way Nathan demanded to see all the receipts.

As I read on, I could see in a way why Nathan behaved how he did.  There was a lot more to things and I think they affected him more than was thought.  What he did still was not right though.  There really was no excuse.

I was most interested in the storm glasses which were used to predict the weather. They sounded so beautiful and delicate.

‘The Storm’ is a gripping, tense and chilling read.  It is a story about love and what sacrifices you would make to save someone even if it means virtually giving up the life you wanted for yourself.

This is without doubt one of my favourite books of the year so far.  I highly recommend it.  I really think that this would make a good television drama.

‘The Storm’ can be pre-ordered / purchased from:-

Amanda Jennings was born in London in 1973, and her family moved to a village in rural Berkshire when she was young. She accepted a place to read architecture at Cambridge University, but it soon became clear it wasn’t for her and after a year she changed course to History of Art. After she finished university she set up a company with a friend writing copy for a variety of small businesses and then a year or so later was offered a job as a researcher at the BBC. But when she had her first child she found it hard to juggle home life with working, and could no longer ignore her yearning to write. When she became pregnant with her second child, and encouraged by the success of a shortlisted sitcom script in a BBC writing competition, she took the opportunity to be at home with her children, and grabbed every spare moment she could find to write.

Sworn Secret, her first novel, was published in the UK in August 2012. On kindle it was #4 bestseller in the UK, a Top 100 bestseller in the US, and reached the #1 spot in Italy in translation. It was also published in Taiwan in translation. Her second book, The Judas Scar, was published in May 2014, and shortly after was optioned by a film and television production company. In Her Wake, her third, was a WHSmith Fresh Talent pick and will be published in Germany, Sweden, Turkey and Italy. The Cliff House is published by HQ, an imprint of HarperCollins, in hardback, audio, ebook, and paperback, as well as internationally. HQ are publishing The Storm in July.

Amanda enjoys appearing at events, is a regular guest on BBC Berkshire’s Book Club, and is a judge for the annual Henley Youth Festival writing competition. She has been involved in the WoMentoring Project, which offers mentoring support for talented female writers with women who work in the literary world, and run writers’ workshops.

Amanda lives just outside Henley-on-Thames and has three daughters and a varied menagerie. She is currently writing her sixth book, which will be set on Bodmin Moor. When she isn’t writing she can generally be found walking the dog or dreaming of mountains or the sea.