Archive for the tag “family curse” 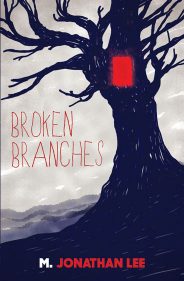 ‘Broken Branches’ is being published both in paperback and as an eBook on the 27th July 2017 by Hideaway Fall, a brand new publisher. This is M. Jonathan Lee’s fourth novel and I was very kindly sent a copy to review along with some lovely goodies which I shall definitely be making use of.

A family tragedy means that Ian Perkins is the next in line to inherit Cobweb Cottage. He moves there with his wife and young son and is aware of the rumour that there is a curse which has passed down from generation to generation. But does it really exist and is he risking his family’s safety? Ian is determined to discover the truth and in doing so finds that he has no choice but to face the past.

I enjoyed reading ‘Broken Branches’ and thought it was beautifully written. I really liked the author’s references to seeds and branches throughout including in the acknowledgements. This isn’t exactly what I’d call a happy story and it definitely isn’t fast paced, nor is it a thriller so it may not be for everyone. Rather it is a tragic and haunting tale which will stay with you for quite a while.

Ian’s quest to find out whether there is indeed a family curse means that he ends up delving into his past. Throughout the story the reader gets to learn about Ian’s childhood and how the curse supposedly started. I felt really quite bad for him as he didn’t seem to have a very easy time of it growing up. His father was controlling and there were things Ian shouldn’t have had to see as a young boy.

The research Ian undertook became a bit too much of an obsession. I don’t think he realised just how much it was taking over and the damage it was causing to him and his personal life. I guess it was his way of handling things though. He obviously thought he was really onto something.

‘Broken Branches’ is a sad and ghostly story about loss, grief and learning to deal with it. It tackles mental health issues, something M. Jonathan Lee is doing his very best to raise awareness of.

M. Jonathan Lee (also known as Jonathan Lee) was born in 1974. He is an award-winning novelist who has had two novels in the #10 Amazon charts. He was born in Yorkshire, northern England where he still lives today.

His first novel, the critically-acclaimed The Radio was shortlisted for The Novel Prize 2012 and is the first in the loosely titled The ‘The’ trilogy. His second novel, The Page (the second in The ‘The’ trilogy) was released in January 2015.

His third novel A Tiny Feeling of Fear was released in September 2015. It has been hailed as ‘original and inspiring’ by Sunday Times best-selling author, Milly Johnson.

He is working closely with Rethink and Mind Charities to raise awareness of mental health issues, and is a regular commentator on the BBC.

He signed a four-book deal in February 2015 and is currently writing a non-fiction rock biography about Boston-based band Hallelujah the Hills. He is also writing three further fiction titles, the first of which is to be released in late 2017.

His fourth novel, Broken Branches is due out in July 2017, published by Hideaway Fall.

‘Broken Branches’ is available to pre-order from:-

Do check out Hideaway Fall’s website where you can buy M. Jonathan Lee’s previous books:-