Archive for the tag “inspirational” 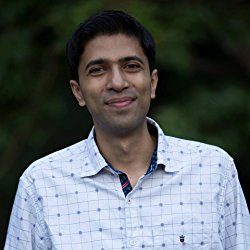 I am delighted to welcome Pankaj Giri to my blog.  His new novel, ‘The Fragile Thread of Hope’ was published as an eBook in November and I have been hearing very good things about it.  I will be reviewing Pankaj’s book next month.

Pankaj has written an interesting post about writing.  I hope you all enjoy it and that it proves useful for many of you.

I have been writing for the past few years. In 2015, I authored a novel and got it published by a small publisher. However, as I began getting reviews, I realized the monumental blunders that I had committed, as far as writing is concerned. Over the years, experience has enabled me to cultivate certain writing tips that I would like to point out so that it could be of some help to aspiring writers.

Avoid big words and read extensively before beginning writing: In order to be different from other commercial authors, I committed a huge mistake in my first book: I used a lot of big words. Perhaps, it was one of the primary reasons that my book failed to be lapped up by prospective readers. The idea of using big words came to me when I read a book containing flowery language and happened to check out its review in Amazon. The reviewer stated that this is the kind of writing that young authors should emulate rather than trying to copy the bland language used by popular commercial authors. Misguided, I began to use big words, hoping publishers would be impressed by my vocabulary, but alas, it turned out to be a blunder. Later, after the debacle of my first book, I began reading some critically acclaimed books. Strangely, before writing my first book, I had not read many books. I’d just read a couple of mass market books similar to my genre, and as I had a story ready, I foolishly dived into the stream of writing. Somehow, I did manage to finish my book, but since I hadn’t read much, dangerous tips like the one mentioned above trapped me in their tentacles and thus I ended up corrupting my own book. The turning point came when I read the award-winning novel ‘The Kite Runner’. Then I realized that the key to good writing isn’t using big words, but weaving together simple words to create a magical effect, like Khaled Hosseini does. After that, I read a lot of books, which ended up influencing my writing style. So I would advise you to read a lot of books, especially critically acclaimed books before even venturing into writing. Also, while reading you should ensure that you are very observant. Whenever you come across a beautifully constructed sentence, a wonderful metaphor, or a magical simile, note it down somewhere and try your best to form a mental imprint of it. This will really help you to take your writing to the next level, as when you sit down to write next time, your brain starts suggesting those sentences when you come across similar scenarios in your book. You can then refer to your notes and try to imbibe those writing tidbits into your narrative. Once you have read a variety of books, a blend of different writing styles seeps into your subconscious, which eventually helps you forge your own unique writing style/voice.

Use fewer adverbs and adjectives: Another mistake that I had made in my first book was the blatant overuse of adverbs. As the prominent writer, Stephen King, says, “The road to hell is paved with adverbs”. Adverbs are a reflection of weak, lazy writing as they don’t form a good enough picture for the reader, thus violating the show-don’t-tell rule. For example, consider this sentence: “You are wrong,” Fred said angrily. Does this help you picture or feel anything? How was the anger? How was Fred’s voice? However, consider this alternative: “You are wrong,” Fred barked, his eyes glinting with anger. Now, with the stronger verb bark, you can imagine the rough tone of voice. Also, his eyes are shining with anger, helping you visualize the scene better. However, that doesn’t mean you shouldn’t use adverbs at all. Occasional use of adverbs, especially if it is not in dialogue tags, is alright. Also, try your best to remove redundant adjectives from your narrative. For example, instead of saying the smelly, intoxicated drunkard was walking, just say the drunkard was walking, as drunkards are already smelly and intoxicated.

Show, don’t tell: This is a slightly confusing rule as, traditionally, a story is meant to be told. However, if you remember, even the good traditional storytellers made us visualize the scene, which made the story much more compelling. The reader should feel as if he is travelling, seeing, hearing, experiencing everything along with the characters. For example, instead of saying that it was a rainy day and Mary got wet while going home, show her walking towards home, raindrops flirting with her hair, her shirt sticking to her skin. The traits of the characters should be shown by their actions, their mannerisms, rather than being told in a blunt way. For example, instead of saying that Tom was a funny man and he used to make everyone laugh, show Tom cracking a joke and everyone laughing at it. Also, weave the backstories of the characters as either plain remembrances or a photograph or object taking you to the past, which helps develop the character, rather than writing direct blocks of telling in between scenes. Also, writing dialogue is the best way to follow the show-don’t-tell rule. The characters are actively involved and their expressions, actions come to the fore. It is also easier to reveal certain things (character traits, backstory) in a dialogue rather than telling it in the narrative, but you should make sure that the revelation doesn’t seem forced or else it might backfire.

Don’t do head hopping: If you are writing in the third person, ensure that you don’t end up showing the thoughts of other characters apart from the main character. That ends up confusing the reader and diminishes the emotional connect that the reader has with the primary character.

Ensure proper punctuation: Read about the proper usage of commas, semicolons, colons, em dashes, parenthesis, exclamation marks before beginning your project. Make sure that your dialogue tags end with a comma if it is followed by he/she said/asked, but if the dialogue tag ends with an action, ensure that you use a period. For example, a dialogue ending with he said/asked: “I will kill you,” he said. A dialogue ending with an action: “I will kill you.” He banged his fist on the table. Ensure you use as fewer exclamations as possible, as it is considered as a form of casual, weak writing. Parenthesis/brackets also should be used very sparingly in a literary work.

Use proper editing tools: Don’t forget to use the grammar checking functions of Microsoft Word. It helps to identify a lot of errors like split infinitives, passive sentences, punctuation errors, and other basic grammatical errors. Also, I would recommend using the Grammarly tool, which weeds out all the bugs that Microsoft Word overlooks.

Be careful with descriptions: Ensure that you strike a perfect balance between insufficient and excessive descriptions of surroundings and feelings. The feelings shouldn’t be redundant, and you should weed out any descriptions which may seem unnecessary to the theme of the particular scene. But of course, some description is necessary to create a proper ambiance, and you should not remove them altogether. It is a fine line, but you have to tread it carefully to ensure that the book turns out to be perfect or at least close to it.

Write shorter sentences: The shorter and simpler the sentences, the lesser the chances of making a mistake. Short sentences contribute to easy readability, too. However, longer sentences are also necessary sometimes. You should be able to weave paragraphs with care, mixing short and longer sentences skillfully. It is an art which takes times to master.

Research and read your book’s reviews: Keep reading articles about writing tips and fuel your fire for knowledge daily. If you have already published a book, read reviews with a positive frame of mind and try to learn, even from the harshest review. Although negative reviews might dampen your spirits for some time, you should try your best to understand which aspect of the book the reviewer didn’t like and try to improve upon it in the next book.

On a parting note, I would like to say that writing is a never-ending journey. There is scope for improvement even for accomplished writers and the process of learning always has to go on. Cheers!

A gripping emotional inspirational fiction about love, loss, and finding hope in the darkest of times.

In the autumn of 2012, destiny wreaks havoc on two unsuspecting people—Soham and Fiona.

Although his devastating past involving his brother still haunted him, Soham had established a promising career for himself in Bangalore.

After a difficult childhood, Fiona’s fortunes had finally taken a turn for the better. She had married her beloved, and her life was as perfect as she had ever imagined it to be.

But when tragedy strikes them yet again, their fundamentally fragile lives threaten to fall apart.

Can Fiona and Soham overcome their grief?

Will the overwhelming pain destroy their lives?

Seasoned with the flavours of exotic Nepalese traditions and set in the picturesque Indian hill station, Gangtok, The Fragile Thread of Hope explores the themes of spirituality, faith, alcoholism, love, and guilt while navigating the complex maze of family relationships.

Inspirational and heart-wrenchingly intimate, it urges you to wonder—does hope stand a chance in this travesty called life?

‘The Fragile Thread of Hope’ can be purchased from:-

Pankaj Giri was born and brought up in Gangtok, Sikkim—a picturesque hill station in India. He began his writing career in 2015 by co-authoring a book—Friendship Love and Killer Escapades (FLAKE). Learning from experience and the constructive criticism that he got for his first book, he has now written a new novel—The Fragile Thread of Hope, a mainstream literary fiction dealing with love, loss, and family relationships. He is currently working in the government sector in Sikkim. He likes to kill time by listening to progressive metal music and watching cricket.