‘Chasing Hares’ was published on the 15th November 2019 in paperback and as an eBook by Salt.  Today I am taking part in the blog tour with a book promotion post.  I would like to thank Emma Dowson for inviting me to participate. 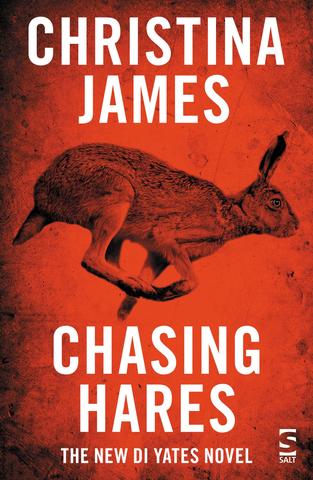 Gordon Bemrose, a shady local businessman who lives in a large house on an island in the River Welland, decides he can make easy money from the property by using it for Country House murder weekends. For the first, introductory, weekend he recruits ten people from very different backgrounds: Ava and Reggie Dack and Lizzie and Jackson Fox, two self-made couples from Essex; Sonia and Richard Renwick, respectively a successful beautician and her husband, who is a failed writer; Dora Westerman, a lady of indeterminate age and obviously very slender means; Amelia Baker, an English literature student; and Margarett and Colin Franklin, a mixed-race couple of modest origins whom all the others look down upon. Reluctantly assisting with the festivities are Patti Gardner, Gordon’s niece, who has been roped in to speak about the work of a SOCO, and Anton Greenweal, his nephew, who has achieved instant fame on a TV reality show and will be the lead actor in a short play to be performed during the weekend. The play is central to Gordon’s plans: he intends it to be based on a popular farce, but with a macabre twist as its finale.

Events take an unexpected turn when a real murder takes place; and DI Yates, investigating, discovers that each of the guests had an ulterior motive for participating in the crime weekend. Everyone on the island becomes a suspect, including Patti, his former girlfriend. Meanwhile, an epidemic of hare coursing is sweeping the county. This illegal and cruel ‘sport’ is pursued by cynical gamblers who bet high stakes on whose dog will catch the hare. On her way back to Spalding police station from a meeting in Bourne, DS Juliet Armstrong discovers a badly-wounded Saluki that has been abandoned by hare coursers and is determined to bring them to justice.

The eighth DI Yates novel is a modern take on the country house murder story; it also explores the crime of hare coursing, which is currently top of the agenda for police forces in Lincolnshire.

Sounds great doesn’t it?  ‘Chasing Hares’ can be purchased from:-

Christina James is the author of a crime thriller series set in the Fenlands of South Lincolnshire. Her first crime novel, In the Family, finds Detective Inspector Yates investigating a cold case that leads deep into the secrets of a dysfunctional family. Almost Love, the second of the series, published in June 2013, concerns the mysterious disappearance of a veteran archaeologist. Sausage Hall, published in November 2014, deals with the exploitation of women in both Victorian England and the present day. Christina James is the pseudonym of an established non-fiction writer.