Archive for the tag “Petit Four”

Last month I took part in a book launch for ‘Petit Four’.  Click on the link below to be taken to my blog post.

I have since read ‘Petit Four’ and as part of a blog tour I am now reviewing it.

‘Petit Four’ has been edited by Lucie Simone who has also written the introduction.  I think it’s wonderful how this anthology was created simply by Sue Watson suggesting to Lucie that they write a book about cake.  ‘Petit Four’ consists of four lovely romantic short stories.

Tara takes her niece on holiday to Paris for two weeks as a graduation present.  But little is she prepared for events there.

In this story two people rekindle their love 32 years later.  I really enjoyed reading ‘Après Vous’.  The descriptions of the Eiffel Tower were wonderful.  Cake played a big part.

Olivia Cisneros starts working at SF Bridge News as a staff reporter with Tammy Kovac is her mentor.  Tammy is shocked to find that Olivia doesn’t eat cake and takes the necessary action to change her mind.  They soon become the best of friends.

Seven years later and lots has happened in Olivia’s life.  To top it all Tammy gets a new job which means a new colleague for Olivia to get used to.

I liked how Olivia’s friends and even her little girl all rallied together to get her out of the rut she was stuck in.

‘The Heart-Shaped Secret of Raspberry Jam’ by Sue Watson

Milly works as a waitress at the Victoriana Tea Rooms.  She loves baking and dreams of owning her own café.  For Milly cakes play a big part in her life, conjuring up various memories.  Capable of producing some wonderful creations Milly is constantly put down by her boss.  However, things are about to change.  It looks like the tea rooms are about to be taken over.  But what of Milly’s job?

This was a wonderful and often funny story.  The descriptions of the cakes were absolutely heavenly and made me salivate.  I would so love to eat rose-scented cakes and champagne cupcakes.  I was so happy when Mrs Jackson got her just desserts.

‘Her Charms’ by Joel Zlotnik

Scott is the Mayor of Ola Vista, a small and respectable town.  One day whilst in the park Scott meets a woman called Nicole who gives him a St Patrick’s Day cupcake containing a four-leaf clover charm.  He asks her out and they soon start dating.  Scott regularly finds cupcakes left by Nicole outside his front door with various charms and notes.

This story has been written from a man’s point of view which is a good idea as it is too easy to forget about how the male feels in romantic situations.  I think the whole cupcake thing was lovely.

I enjoyed reading all four stories.  They made me feel nice and relaxed and I felt at times as if I was sitting on a fluffy cloud somewhere.  My favourite story was ‘The Heart-Shaped Secret of Raspberry Jam’ by Sue Watson closely followed by ‘Après Vous’ by Lucie Simone. 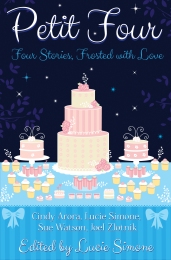 Today ‘Petit Four’ is published by Simon & Fig.  The cover alone is bound to get your mouth watering.

Cake is often a major part of life’s celebrations, both big and small. From birthdays to wedding days, cake, in all its delectable concoctions, marks joyous occasions with a sweetness that can’t be beat. But even better is the love that is shared when two people connect over a sweet confection. Maybe it’s a cute new guy wreaking havoc on a broken heart, or a beautiful woman testing the limits of love, or an old beau stirring up long lost desires. Whatever the circumstances, cake can always be relied upon to save the day when it comes to affairs of the heart. In this collection of short stories, cake is the delicious center around which each tale unfolds and romance blooms.

When single mom and journalist, Olivia, sets out to find romance in Cindy Arora’s “Cake Therapy,” she gets a little help from her friends and more than a few slices of cake to coax her off the couch and into the arms of a truly great love. Lucie Simone’s “Aprez Vous” finds success-driven Tara in Paris reminiscing of her long lost love, Jean Marc, and her niece bound and determined to reunite them. In “The Heart-Shaped Secret of Raspberry Jam” by Sue Watson, cake enthusiast, Milly, meets her match in the kitchen, and other places, when new owners take over the tea rooms where she works and her talents and her heart are put to the test. And Scott, mayor of a small seaside community, flirts with political suicide in Joel Zlotnik’s “Her Charms” when he falls for new-in-town Nicole, an entrepreneur with a passion for cupcakes, and whose latest venture proves a little too sexy for the sleepy beach town.

From San Francisco to Paris, from small towns to tea rooms, this anthology tempts readers with humor, style, romance, and the powerful aphrodisiac that is cake. Petit Four is four stories, frosted with love.