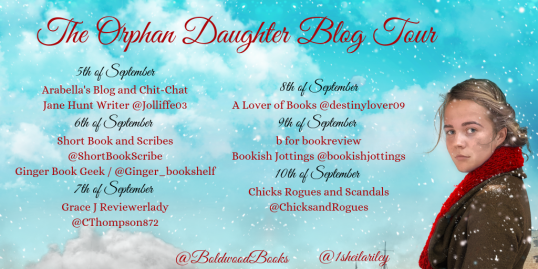 It is a real pleasure to be taking part in this blog tour today.  ‘The Orphan Daughter’, the first book in the Reckoner’s Row series, was published in paperback and as an eBook on the 5th September 2019 by Boldwood Books and is also available as an audiobook and audio CD.  I would like to thank the publisher for inviting me to participate in this tour.

I have an extract from ‘The Orphan Daughter’ for you all.  First though here is what the book is about. 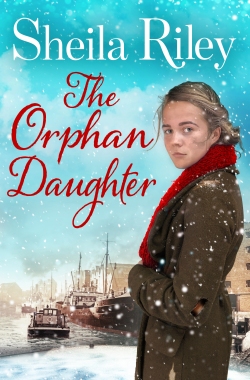 Evie Kilgaren is a fighter. Abandoned by her mother and with her father long gone, she is left to raise her siblings in dockside Liverpool, as they battle against the coldest winter on record. But she is determined to make a life for herself and create a happy home for what’s left of her family.

Desperate for work, Evie takes a job at the Tram Tavern under the kindly watch of pub landlady, and pillar of the community, Connie Sharp. But Connie has problems of her own when her quiet life of spinsterhood is upturned with the arrival of a mysterious undercover detective from out of town.

When melting ice reveals a body in the canal, things take a turn for the worst for the residents of Reckoner’s Row. Who could be responsible for such a brutal attack? And can Evie keep her family safe before they strike again?

A gritty, historical family drama full of laughter and tears from the author of Annie Groves’ bestsellers including Child of the Mersey and Christmas on the Mersey. Perfect for fans of Lyn Andrews, Katie Flynn and Nadine Dorries.

Nineteen-year-old Evie Kilgaren gathered her mane of honey-coloured hair into a loop of knicker elastic before taking a vase of heavy-scented lilies and freesias into the kitchen. The flowers were barely faded when she rescued them from the churchyard bin that morning.

Placing them in the centre of the table, she hoped their heady scent would mask the smell of damp that riddled every dwelling in the row of terraced houses opposite the canal and add a bit of joy to the place.

‘Who’s dead?’ her mother, Rene, asked. Her scornful retort was proof she had already been at the gin and Evie’s heart sank. She had wanted today to be special. Surely her dead father’s birthday warranted a few flowers. Even if they were knockoffs from the church – at least she had made an effort, which was more than her mother had.

‘I got them for Dad’s…’ Evie was silenced by the warning flash in her mother’s dark eyes. A warning she had seen many times before. Rene gave a hefty sniff, her eyes squinting to focus, her brow wrinkled, and her olive skin flushed. Evie knew that when her mother had drunk enough ‘mother’s ruin’, she could be the life and soul of any party or, by contrast, one over could make her contrary and argumentative.

‘I thought they’d look nice on the table,’ Evie answered lightly, quickly changing her answer to try and keep the peace. She should have known better than to mention her father in front of Leo Darnel, who’d moved in as their lodger six months ago and taken no time at all getting his feet under her mother’s eiderdown. ‘I found a vase in…’ Her voice trailed off. Her mother wasn’t listening. As usual, she’d disappeared into the parlour to darken her finely shaped eyebrows with soot from the unlit grate – make-up was still on ration – dolling herself up for her shift behind the bar of the Tram Tavern. The tavern was barely a stone’s throw away on the other side of the narrow alleyway running alongside their house, so why her mother felt the need to dress to the nines was anybody’s guess.

Out of the corner of her eye, Evie noticed a sudden movement from their lodger, who was standing near the range, which she had black-leaded that morning. Leo Darnel didn’t like her and that was fine, because she didn’t like him either.

He was a jumped-up spiv who tried to pass himself off as a respectable businessman. Respectable? He didn’t know the meaning of the word, she thought, her eyes taking in the polished leather Chesterfield suite that cluttered the room and seemed out of place in a small backstreet terraced house.

‘None of your utility stuff,’ he’d said, pushing out his blubbery chest like a strutting pigeon. All the time he had a wonky eye on the bedroom door. He would do anything to keep her mother sweet and made it obvious every chance he got to show Evie she was in the way.

He’d been very quiet for the last few minutes, Evie realised. That wasn’t like Darnel . He was up to something, she could tell. He hadn’t interrupted with a sarcastic comment as he usually did when she and her mother were having a tit-for-tat. His self-satisfied smirk stretched mean across thin lips as he hunched inside a crisp white shirt and peered at her.

His beady eyes looked her up and down as he chewed a spent matchstick at the corner of his mouth before turning back to the grate. His piggy eyes were engrossed in the rising flames of something he had thrown onto the fire. Her attention darted to the blaze casting dancing flares of light across the room.

‘No!’ Evie heard the gasp of horror and disbelief coming from her own lips. How could he be so callous? How could he? As he stepped back with arms outstretched like he was showing off a new sofa, Evie could see exactly what he had done.

‘You burned them!’ Evie cried, hurrying over to the range, pushing Darnel out of her way and grabbing the brass fire tongs from the companion set on the hearth, desperate to save at least some of the valuable night-school work.

Two years of concentrated learning to prove she was just as good as all the rest – reduced to ashes in moments. Thrusting the tongs into the flames again and again was hopeless Her valuable notes disintegrated.

‘Mam, look! Look what he’s done!’ Her blue eyes blazed as hotly as the flames licking up the chimney.

‘You are not the only one who can crawl out of the gutter? Mr High-and-mighty!’ Evie was breathless when her burst of anger erupted, watching the flames envelope her books, turning the curling pages to ash. She balled her work-worn hands, roughly red through cleaning up after other people and pummelled his chest. Why? She caught his mocking eyes turn to flint before being dealt a quick backhander that made her head spin.

Her nostrils, which only moments before had been filled with the sweet fragrance of summer freesias and Mansion polish, were now congested with blood as traitorous tears rolled down her cheek. Evie dashed them away with the pad of her hand, ashamed and angry because he was privy to her vulnerability. Her pale blue eyes dashed from the range to her mother, who was now standing in the doorway shaking painted nails.

‘The Orphan Daughter’ is available to buy from Amazon UK:- 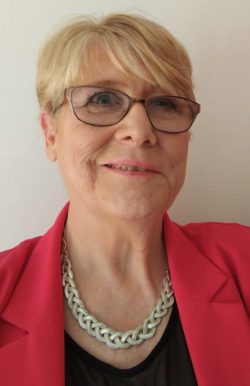 Sheila Riley wrote four #1 bestselling novels under the pseudonym Annie Groves and is now writing a new saga trilogy under her own name. She has set it around the River Mersey and its docklands near to where she spent her early years.  She still lives in Liverpool.