Archive for the tag “Richard Sapir” 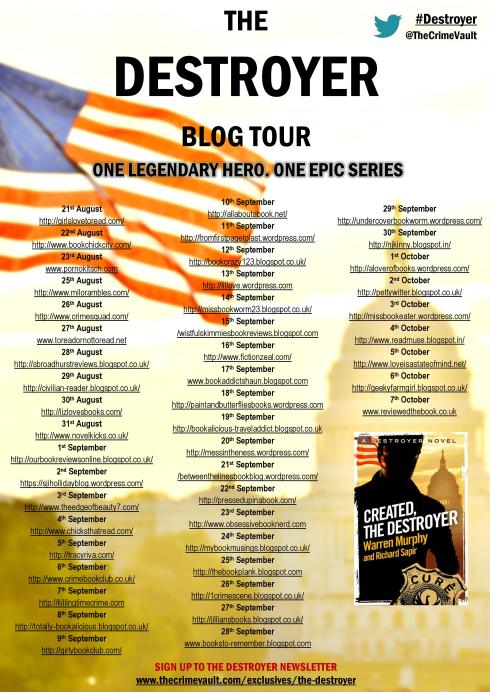 ‘Created, The Destroyer’ is the first title in The Destroyer series.  Warren Murphy co-wrote this book with Richard Sapir in 1963.  The series is composed of 145 titles and has sold more than 60 million copies.  The books are now being republished. 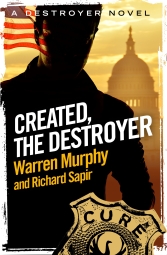 As part of this tour I was very kindly sent a copy of ‘Created, The Destroyer’ to read and review.

Remo Williams, a former police officer, has just lost everything. Sentenced to death for a crime he supposedly committed he is now counting down the hours until he is led to the electric chair.  During his last rites Remo is given a black pill and told to bite into it exactly before he is electrocuted.

Remo wakes up in a strange place and realises he isn’t dead after all. He soon discovers that he has been recruited by a secret government organisation who called themselves CURE.  Their aim is to defend the country outside the law.  Remo is to be their new assassin: The Destroyer.  He has to go through lots of training in preparation for his assignments, which as he finds comes  in very useful.  But is he able to fulfil his tasks?

Until recently I had never heard of The Destroyer series. This book sounded interesting so I thought I would give it a go.  It was enjoyable enough and it only took me a couple of days to read.

I quite liked Remo, but the things he said and did in those days he wouldn’t get away with now. I felt that Chiun, the man who trained Remo up was mentioned way too much throughout the story.  I also didn’t really get the foreword at the beginning.

I personally felt that this book was enough and I don’t plan to read any more of the titles. It’s not really for me but I’m sure there will be lots of people out there who do like this series.