Archive for the tag “Sara Alexi”

Blog Tour – ‘The Other Daughter’ by Sara Alexi 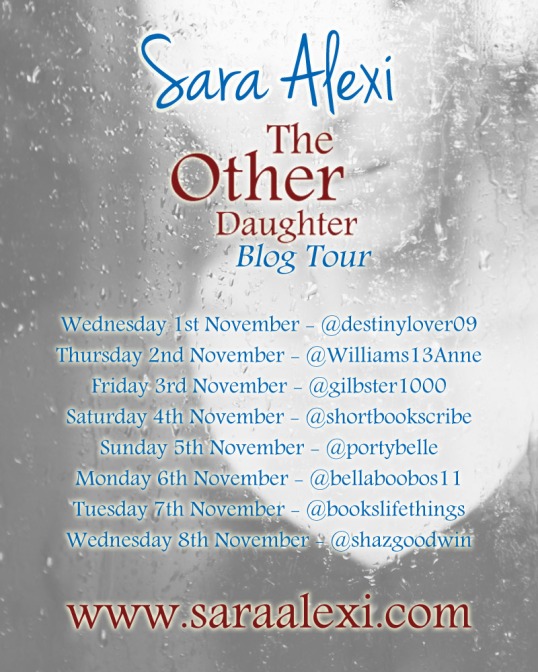 It’s a brand new month and I am absolutely delighted to be kicking off the blog tour for Sara Alexi’s new book, ‘The Other Daughter’ which is out today as an eBook.  Set in Yorkshire this is the first of a series.

I have an exclusive extract for all of you to read.  First though here’s what the book is about.

The Other Daughter by Sara Alexi is a compelling and gritty tale, set amongst the wild moors and crooked streets of a Yorkshire Village, following one woman who finally untangles herself from the clutches of a painful past and a self-centred mother.

More than a decade after leaving home Dawn finds herself stuck in a dead-end job, in a rundown flat, while her sister has it all – the husband, children and prestigious job in sunny Australia. Their mum’s favouritism is palpable, and even as she has a terrible fall leaving Dawn to pick up the pieces, nothing Dawn does can live up to her perfect, absent sister.

But still Dawn persists with taking care of her aging and fragile mum, until one day it begins to feel like the only thing standing between Dawn and her happiness is her mother’s continued, pitiful existence…

There are more paintings in there, too – ones that Dad collected. It’s strange to remember him when he was alive. Even when he was alive, it was like he wasn’t. Her memory is of a hunched-over man in a drab dressing gown, moping his way from one room to another. Always in that dressing gown. There was another man, too, of whom she only caught brief glimpses – a man who was almost never there. He wore a white shirt, and always a tie and jacket, and he worked long hours. Mum has never been one to talk about the past, or emotions, or say anything worth actually saying, but Dawn has pieced it together, and it came as a bit of a shock that these two men were one and the same. Both were her father: one when he did nothing but work, and the other when he was depressed. He died of lymphatic cancer when she was thirteen, on the day of the school dance, which she had been so excited about, and because he had died she was not allowed to go. She did not need telling she could not go; a death is a shock. She was not very upset, though; he had never been around anyway, and what difference did it make to her? The word ‘father’ meant nothing to her, and surely it was better to live whilst she had the chance. Of course, now she can see why they stopped her going: it was a matter of respect. But at the time it had felt unfair.

Hopefully the extract has left you dying to read ‘The Other Daughter’.  If so, it is available to buy from Amazon UK – http://snig.gr/13 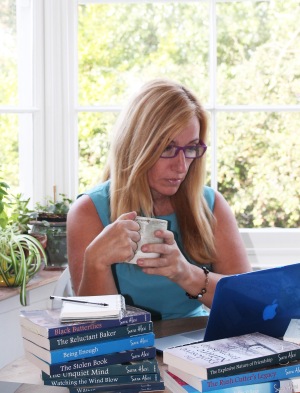 I would like to introduce you all to Sara Alexi.  Sara has written a very interesting guest post about the inspiration behind her new story.  I hope you enjoy reading it as much as I did.

My latest story, a trio of novellas set in Greece, as with all my books, is based on true events.

This one was catalysed by two cousins I know who inherited a yacht when their uncle died. One of the cousins lived in Greece and the other had moved abroad, despairing of the complication of running a business within the Greek system.

A storm came up and the yacht broke free of its moorings, and damaged the boat next door. The cousin who lived in Greece could not move the boat to a safer harbour as probate had not completed and so it was not his yet, but despite this fact the port police insist that he make the situation safe.

In short he could not comply with the law unless he broke the law. Eventually he gained permission to take it out of the water and keep it on the pier for some months. But probate is a process that takes time in any country and after a while the port police started getting impatient. 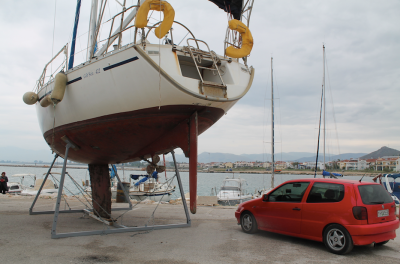 The probate reached its final stage and the cousin who lived abroad realised that once the boat was in his name he would be obliged to file a tax return in Greece, and he really didn’t want to get into the Greek system again, not for a half share in an old boat!

So he tried to revoke his right to the inheritance, but he had left it too late (there is a four month period in Greece, after which the inheritance passes to the heirs automatically), and so the legal process ground to a halt. The port police demanded that the boat be moved as it had overstayed its welcome, the lawyers refused to do any more until the two cousins found an agreement, and the insurance company refused to cover the vessel because it was not in a location they considered secure.

The cousin in Greece was tearing his hair out, but finally the cousin abroad agreed to let the process complete, on condition that his share would be transferred immediately that probate completed; he wanted nothing to do with the boat and the Greek system.

It worked out well for my friend in Greece, who eventually (more than a year later) inherited the whole boat and sold it for over €30,000, at which the second cousin demanded his half which of course he was no longer entitled to.

I have tried to simplify the tale to make it clearly understandable here. The whole business was a great deal more convoluted in reality. It was easy to see how these two men, both of whom were intelligent, became flummoxed by the Greek system.

I naturally wondered what would have happened if the men were not so smart and that was how the story began to crystallise.

The story, obviously, pivots around a boat but as I am more interested in people I steered the story in many directions to add interest, mostly for myself in the writing, but without losing the theme.

It was great fun to write. The two protagonists forever fall foul of the law and try to find sneaky ways to get around what they should be doing and eventually, and I think inevitably, they fall out with each other.

The book is light hearted but as is the way with the stories I write I do love a good character and I love a character to develop through the novel, so naturally there is a very human side to this tale.

I broke the story into three parts to ensure it remained light but mostly because I have some very dedicated fans who are insatiable readers and this was a way to provide them with a story a month for three months.

Sara Alexi is one of the top 150 most successful, self-published authors of all time; a prolific writer, she has written 15 books (and counting) in just four years, with book sales reaching well over half a million copies.

Remarkably, Sara is dyslexic. At school English lessons were a time of confusion, she found that books were indecipherable hieroglyphics and she was unable to enjoy reading and writing; growing up in a time when dyslexia was not well understood and little or no support was available. And so her artistic nature was confined to painting, an art form that she loved and would take her travelling around the world.

Despite her dyslexia Sara qualified as a psychotherapist and ran her own practice in Yorkshire for many years. In a casual conversation with a client, she discovered that Agatha Christie, Jules Verne and Hans Christian Andersen were all dyslexic, and Sara’s perspective changed. The world of fiction opened to her with this shift in perception.

Sara now spends much of her time in a tiny rural village in the Peloponnese, in Greece, where she is (very slowly) renovating a ruined stone farmhouse, whilst observing the Greek way of life and absorbing the culture, enriching her vision for both writing and painting.

Sara’s ‘Greek Village Series’ is inspired by the people she has met travelling, her time spent in Greece alongside her career as a psychotherapist; her writing provides a keenly observed, compassionate insight into people, culture, and the human condition, and is set around a charming rural Greek village

Predating the current refugee crisis in Greece by some three years, Sara’s debut novel, The Illegal Gardener, focuses on the immigration problems in Greece, and the clash of cultures that accompanies those seeking a better life in the West.

‘The Village Idiots: Part 1 – Inheritance’ is available to buy in paperback or as an eBook from Amazon UK:-

Like Loading...
Posted in Guest Blog Posts and tagged a series of three novellas, based on true events, fiction, sailing yacht, Sara Alexi, set in Greece, The Village Idiots