Archive for the tag “summer romance” ‘A Summer Scandal’ was published in paperback and as an eBook on the 28th June 2018 by Avon Books.  I am absolutely delighted to be taking part in this blog tour and would like to thank Sabah Khan for inviting me to participate.

I have an extract from the book for you which will hopefully leave you wanting to read more.  First though, here’s what it’s about. 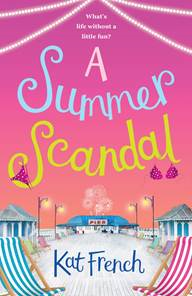 A feel-good summer romance guaranteed to make you laugh out loud!

Summer has never been so scandalous…

When Violet moves to Swallow Beach, she inherits a small Victorian pier with an empty arcade perched on the end of it, and falls in love immediately. She wants nothing more than to rejuvenate it and make it grand again – but how?

When she meets hunky Calvin, inspiration strikes. What if she turned the arcade into an adult-themed arcade full of artisan shops?

Not everyone in the town is happy with the idea, but Violet loves her arcade and business begins to boom. But as tensions worsen and the heat between her and Calvin begins to grow, life at Swallow Beach becomes tricky. Is it worth staying to ride out the storm? And can Violet find her own happy ending before the swallows fly south for the winter?

Sexy, sassy and full of heart, Kat French is back in a new summer sizzler.

After an afternoon spent arranging her temporary workspace and a rather unglamorous dinner of cheese on toast, Violet decided to call it quits and have an early night. She’d called her mum, replied to a text from Simon and tomorrow she planned to get stuck into her next work order. Her whole world seemed to have flipped on its axis since she’d received the letter from her grandpa; she found the idea of getting her teeth into work familiar and soothing.

Turning out the lights, she headed for the bathroom to brush her teeth, and then paused, surprised by the sight of a note pushed underneath her door.

Being neighbourly. Here’s my mobile number in case you hear anything go bump in the night. Or run out of milk. Or you’re lonely. C x

He’d scrawled his number underneath in the same confident script as his words. Violet couldn’t help but smile as she read it twice over, then put it down beside the old telephone. Cal seemed to live his life with his finger permanently on the humour button; given that everything else around her seemed deep and confusing, he was a tonic. She’d heard him go out earlier in the evening, and found the top floor a lonelier place without him across the hall. He wasn’t the quietest of neighbours. In fact earlier he’d been making quite a racket at times, hammering and sanding by the sound of it. Perhaps he was a DIY fan.

After a moment’s hesitation, she went back into the living room and ripped a page out of her notepad, scrawling on it before opening her front door and making a PJ-clad dash across to Cal’s apartment. Her heart hammered in case he came back while she was out there, but all was quiet.

She paused as she passed the huge landing window looking down over the bay. It was gorgeous by night, creamy street lamps dotted along the seafront, the darkness of the sea glinting beneath the clear moon. She could just about make out the shadow of the pier, a spindled outline. Her feelings for it were already strengthening, especially since finding her name painted there out over the waves. How special. How wondrous, really, as if the past was reaching out and welcoming her to Swallow Beach, asking her to safeguard Monica’s memories. She would. Vi didn’t yet know exactly what she was going to do with the pier, or even if she’d stay here for more than a summer, but she wasn’t leaving until the pier was open again. The intention settled on her shoulders as she stood with her palm flat against the window.

There would be no compulsory purchase order on Violet’s watch. The people of Swallow Beach may well have felt that the pier belonged to them, but the truth was that it belonged to Violet now, and to Monica before her. She really hoped that the townspeople would be glad of her presence in the bay, but if they weren’t … Vi wasn’t a girl accustomed to trouble, but looking out over the pier in that quiet, reflective moment, she resolved that she wasn’t going to be pushed around. It was too important.

‘A Summer Scandal’ is available to buy from Amazon UK:-

Kat writes romantic comedy for HarperCollins. She lives in England with her husband, two little boys and two crazy cats. She loves all things romance – reading it, watching it, and most of all, writing it. Mildly addicted to wine and fairy lights.

Cover Reveal – ‘One Summer in Rome’ by Samantha Tonge

I am thrilled to be taking part in the cover reveal for Samantha Tonge’s new book, ‘One Summer in Rome’ which is being published as an eBook on the 9th May 2018 by HQ Digital.  I love the cover.  It’s so bright and colourful and it would definitely tempt me to read the book.

It’s time to reveal the cover in full.  I hope you all like it……

Mary Smith is turning her very ordinary life upside-down! She’s bought herself a one-way ticket to Rome and is ready for a summer she’ll never forget.

Men might be off the cards for waitress Mary, but within hours of arriving at the utterly charming family-run La Dolce Vita pizzeria, she’s already fallen in love with the bustling capital!

Only Dante Rossi, the mysterious (and drop-dead gorgeous) chef seems displeased with her arrival. And in the heat of the kitchen, it doesn’t take long for long-buried secrets to surface and sparks to fly…

A deliciously heartwarming romance to have you dreaming of summer. Perfect for fans of Debbie Johnson and Caroline Roberts.

Do you like the sound of this book?  Well, it’s available to pre-order now on Amazon UK.  Here’s the link –  http://amzn.to/2rrwXfT 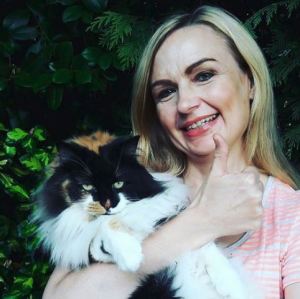 Samantha Tonge lives in Cheshire with her lovely family and a cat who thinks it’s a dog. When not writing she spends her days cycling, willing cakes to rise and avoiding housework. She has sold over 80 short stories to women’s magazines. Her bestselling debut novel, Doubting Abbey, was shortlisted for the Festival of Romantic Fiction best Ebook award in 2014. Game of Scones hit #5 in the UK Kindle chart and won the Best Romantic Ebook category at the 2015 Love Stories Awards.

Posted in Cover Reveals and tagged eBook, heartwarming, HQ Digital, One Summer in Rome, out on the 9th May 2018, Samantha Tonge, set in Rome, summer romance | Leave a comment