Interview with Jared A. Carnie 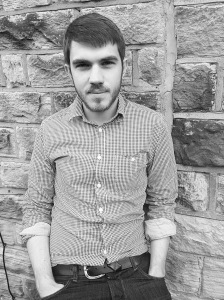 I would like to welcome Jared A. Carnie back to my blog.  Since his last visit, his debut novel, ‘Waves’ has recently been published by Urbane Publications.  I asked Jared some questions.  I hope you enjoy reading my interview with him.

Can you tell me a bit about ‘Waves’ please?

Waves is a novel about someone who thinks their life is going one way, and then suddenly it isn’t anymore. It is set in the Outer Hebrides.

How long did it take you to write this book?

This is probably the question you get asked most when you have a book out. I wish I had a good answer for it. You know, 13 months and six days. Sixty packs of cigarettes. Something like that. To be honest, it’s really hard to say for sure. I did a lot of writing for Waves on the Isle of Lewis, but have done so many re-writes since then, and more recently been going through the proofs etc prior to the launch, that it’s really hard to think about when the novel began and when it really ended. It’s only now it’s out that I can really feel I’m done with it. This isn’t The Life of Pablo. Maybe when all books are digital people will keep tweaking them once they’re out. There’ll be a backlash against the way Game of Thrones ends, so they’ll change the ending and pretend it was always like that.

I think to a certain extent I can relate to all of them. Realistically, as a writer, you probably have to be able to relate, in some way, to all your characters, even if they’re murderers or something like that. If you can’t get inside their heads, how are you going to write them in a believable way?

What would you do if your doorbell rang and one of the characters from your book was standing on your doorstep for real?

Well, are we talking about the characters as they are at the beginning of the book or the end? If Alex from the start of the book turned up at my door, I’d like to think I’d treat him the same way James does in the book. I think a key part of any friendship is being able to recognise when someone needs you to give them a kickstart. If Isobel turned up at my door, I don’t know what I’d do, probably invite her in and see what she wanted to do. She’s more interesting than I am.

What do you hope readers get from your book?

I’d hope that maybe people get a little bit of optimism from the book. Or a desire to go do something. Or maybe they’ll even see some of themselves in Alex’s more mopey, self-indulgent moments, and perhaps try their best to not be like that in future. I think it’s a slow-burner of a book. I don’t think someone is going to slam the book down and go ‘right! My life has changed!’ but I think it might come back to people for a while after they’ve finished it.

Overall I just hope that readers enjoy the writing. I believe strongly in clean writing, and if people are willing to enjoy just rolling with the book then I think they’ll get something out of it. If you’re into plot twists and crime thrillers and things like that, this book will probably disappoint you. And that’s ok. Not every book is for everyone.

How does it feel to finally be a published author?

It’s a strange moment the day your book comes out because nothing really changes. And I mean that with no lack of gratitude. The day Waves was released, I was on a train to work at 7am and didn’t get back home until 8pm. The only difference was that I was checking my phone a lot more during the day – seeing the Amazon page with my name on saying the book had sold out was pretty surreal.

I guess the most ridiculous bit is when people ask you to sign copies. That’s when you can’t deny that you’re a published author. I always have to be honest and let them know I’ve been practising a signature especially. I don’t want anyone under any illusion that I think being asked to sign something is normal.

Did you always want to write?

Recently my girlfriend and I were at my Mum’s house. We found a box of my schoolwork from when I was six or seven. There was one of those sheets with printed sentences on where you had to fill in the blank word. Things like ‘I live with my….Mum and Dad’. One of them was ‘When I grow up I want to…’. My answer was ‘write stories.’ That made us both really happy. I let that little kid down in a lot of ways so I’m glad to be able to say I pulled that one off for him.

What’s the best piece of advice that you have ever been given about writing?

Henry Rollins tells this story about when he met Hubert Selby Jr. Selby told him “all you young writers, you need to get your balls out of the way of your writing.” I always liked that. I prefer first person writing, as a reader and a writer, because I tend to feel more of a connection – and that’s what I read for. But it’s important to remember that you’re writing a novel for someone to experience, and there needs to be a voice for them to experience and go along with. You can’t just scribble out your own narcissism and suddenly you’re Henry Miller.

Can we look forward to anymore books from you?

If you could live your life all over again would you still write?

If anything, I’d do it more. Hopefully I’ve still got a lot of time to make up for this.

Aside from reading and writing? I listen to an ungodly amount of podcasts. I love music more than anything. I watch my girlfriend build her business, BearHugs, in awe. I burden my friends with my anxious, jittery thoughts on things. That’s why there’s so many acknowledgements at the back of Waves. I’m very lucky to have people in my life who tolerate me when I’m pretty intolerable.

You are given the task of living on a desert island for three months and are only allowed to take five items with you.  What would they be?

About Jared A. Carnie

Jared A. Carnie lives in Sheffield. He is a Northern Writers Awards winner. His debut novel, Waves, is available now from Urbane Publications. He can be found at www.jaredacarnie.com

‘Waves’ is available to buy from Urbane Publications – http://urbanepublications.com/books/waves/

3 thoughts on “Interview with Jared A. Carnie”