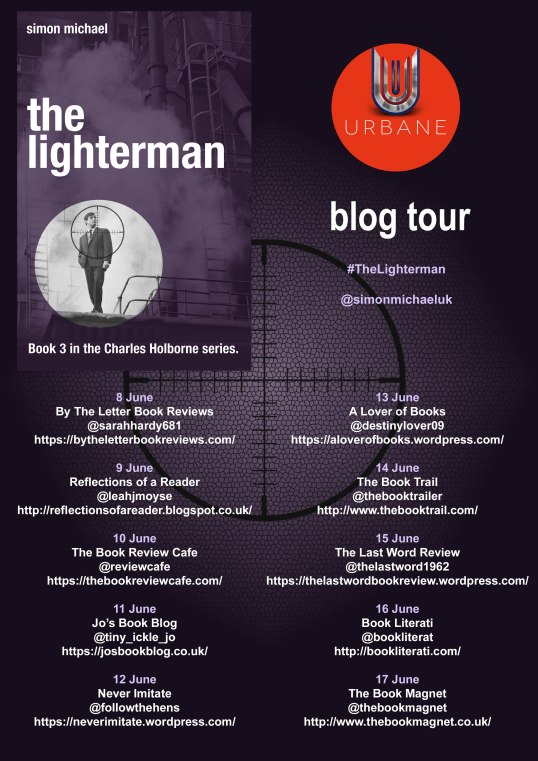 ‘The Lighterman’ was published in paperback on the 8th June 2017 by Urbane Publications and is out as an eBook as well.  I am delighted to be taking part in this blog tour.  Having loved ‘the Brief’ I just know that this is bound to be a winning series.  I have an extract for all of you to read and a competition at the end, but first here’s what the book is about.

The Lighterman is the third book in the bestselling series of legal thrillers starring barrister Charles Holborne.

Simon Michael’s follow up to the bestselling The Brief and An Honest Man, continues the adventures of criminal barrister Charles Holborne. The Lighterman provides more of Charles’ personal history, dating back to the war years when he worked on the River Thames with his cousin Izzy.

When Izzy is accused of murder Charles must dig up the secrets of the past to defend him. But brutal gangland leader Ronnie Kray will stop at nothing to get his revenge on Charles for the events of An Honest Man. Can Charles save his cousin…and his own life?

Simon Michael brings the past vividly back to life across a beautifully rendered 60s landscape, and delivers a gripping piece of thriller fiction that will excite any fan of the genre.

Luftwaffe Hauptmann Heinz Schumann releases his bombs at 03:45 hours. His Dornier 215 is in the middle wave of the attack and although several of the escorting Messerschmitt 109s have been shot down, the approach has been easy. The cloud cover as they crossed the Channel had melted away, and the bomber squadron had simply followed the meandering line of the Thames, deviating slightly every now and then to avoid the puffs of smoke from the anti- aircraft fire and then returning to its course. Ahead of Schumann clusters of incendiaries continue to rain onto the city, dropped by the leading bombers in his formation. As each new cluster falls there is a dazzling flash followed by a flame soaring up from a white centre, turning the underside of the barrage balloons silvery yellow and throwing up great boiling eruptions of smoke. And as each burst of black smoke clears in the breeze, the great river reappears, a black snake in a brightly-illuminated landscape of uncontrolled fire.

As he releases his payload, Schumann is able to look down and obtain a perfect view of the U-shaped bend in the river known by the Britishers as The Isle of Dogs. He watches the bombs drop, becoming tiny black dots before they are swallowed up by the great orange and yellow tongues of flame which leap hundreds of feet into the night air, as if making futile attempts to lick the belly of his Dornier. The Port of London is burning to the ground, and to Schumann’s eye it is both terrible and beautiful.

It takes the 1000 kg bombs 42 seconds to hit the ground. This is what happens on the ground during that period of 42 seconds:

Hallsville Junior School, Agate Street, Canning Town is heaving with over 600 East Enders – men, women and children – awaiting evacuation. Almost all of them are homeless, their houses and schools having been destroyed in the first few days of the Blitz. Some have gathered together a few treasured possessions; some have a cardboard suitcase or two; some, recently dug out from collapsed buildings, have nothing but the nightclothes they stand in, their modesty covered by borrowed blankets, soot and building dust. Almost all have lost family members and the majority carries injuries; the walking wounded of working class London.

New dazed families continued to arrive at the already overcrowded building but, despite all, spirits have been reasonable for much of the day. Then, as the hours pass and the promised transports fail to materialise, muttering turns to anger and anger to shouting at the hopelessly overrun authorities. They are sitting ducks, they protest, with no air raid shelter to protect them and another bombing raid inevitable. By early afternoon a blind eye is being turned to the dozens of East End servicemen who desert from nearby postings to slip into the school and spirit their families away.

The unrest turns to barely-contained panic when the air raid starts. Children shriek with terror and cling to their mothers’ legs as the bombs scream down, shaking the ground with each impact, and the drone of the oncoming Luftwaffe planes goes on, and on, and on, wave after wave, dulling the senses, making it impossible to think beyond the thundering engines and the rising hysteria.

Harry Horowitz, tailor and furrier, lately of British Street, Mile End, and his wife Millie Horowitz, milliner, huddle at the very end of a corridor at the back of the school with their boys, Charles aged 14 and David, 12. Despite the noise of the German planes, the bombs raining down all around them which shake the entire building, and the thick dust-laden air which catches in her throat, Millie’s lifelong debilitating anxiety is focused mostly on David. Her younger son had been running a fever when dragged out of their damaged home two nights earlier, and he now lies in her arms, sweating and shivering uncontrollably. Crouched next to them on the floor of the narrow corridor are four other families, one being that of Millie’s best friend, Sarah, who along with her husband and three girls had arrived earlier that afternoon to claim the last remaining floor space just inside the door leading out to the playground.

Another bomb – one in fact released by the plane preceding that of Luftwaffe Hauptmann Heinz Schumann – screams down towards Agate Street and for a few seconds every adult in the school building holds their breath and falls silent. It lands with an almighty impact and the entire building shakes violently, but it misses the school, destroying instead the row of buildings on the opposite side of the road. Pieces of masonry and shrapnel ping off the cobbles of Agate Street and several heavy pieces of debris crash into the school roof at the front of the building.

Harry Horovitz is a short, dapper man, always perfectly turned out in a three-piece suit, a watch chain across his slim torso. He works long hard hours in his little East End factory which produces high-quality fur coats, stoles and hats for the carriage trade. When he returns to the family home, invariably late and tired, he speaks little, preferring to sit in his armchair by the coal fire in waistcoat and shirt- sleeves and read the newspaper from start to finish in silence. Everyone knows that Millie, sharp-featured and sharp-tongued, wears the trousers in the Horovitz household. However, few realise that on the rare occasion when Harry put his foot down, Millie always complies without a word. She stands and lifts David to his feet, turning to her friend.

Sarah looks up at her husband, who nods his assent.

The nine East End Jews grab their pathetic suitcases and shoulder their way through their terrified neighbours and friends, shouting their apologies over the drone of the aircraft and the explosions all around them, and emerge through the door into the playground.

‘Run!’ shouts Harry, as he leads them across the playground.

Charles hesitates, looking back down the corridor as the rest of his family hurry outside into the orange tinted, dust-filled, cacophony of the air raid. Further down the corridor, into the bowels of the school and just outside its combined gymnasium and hall, is another East End family. The Hoffmanns live only 30 yards from the Horowitz household and their house had, like that of the Horowitz family, been almost completely destroyed in the raid two nights before. The two families often queue together with the same ration books; eat the same sparse food; speak essentially the same language in their respective homes, and have much in common besides. But they never speak beyond an occasional nodded greeting. The Hoffmanns, although refugees from Hitler like many in the surrounding streets, are not Jewish, and Millie and Harry Horowitz’s social circle simply does not include non-Jews. Their lives simply revolve around their home, their business and their synagogue. The Hoffmanns are, simply, “goyim” – of “The Nations” – and accordingly outside the circle. But the Hoffmanns have a daughter, a slim, fair and blue-eyed girl of fourteen, named Adalie. Unknown to either set of parents, while walking back from school every evening Charles Horowitz and Adalie Hoffmann have become friends. They have shared their thoughts on their teachers, their homework and on Hitler. And at Adalie’s instigation, they have shared several sweet, chaste, kisses.

So Charles lingers for a second or two, trying to catch a last glimpse of Adalie, and as a result very nearly loses his life. The rest of his family have stumbled across the rubble- strewn playground and are disappearing through the rear gates of the school. Outside on the street the air glows, backlit by orange flames on all sides; the fires of hell.

The shriek of Luftwaffe Hauptmann Heinz Schumann’s bomb fills the air as Charles, having given up his quest, races across the playground after the shadowy figure of his mother, the last of the party to disappear through the school gates ahead of him. Charles reaches the gate and takes two steps up Agate Street.

The 1000 kg bomb scores a direct hit on the school. Charles is blown off his feet and finds himself sailing eight feet into the air, the explosive pressure drop making him feel as if his eyeballs are being sucked out of their sockets. He lands in an adjoining garden, destroying the rhododendron bush which breaks his fall, and suffers a bruised back and a cut to his scalp from a piece of flying masonry from the school wall. Everyone else in the family is unscathed. Although winded, Charles manages to roll back onto his feet in a single movement and continue running.
Harry Horowitz, soft-spoken East End tailor, has saved the lives of his family.

Later that day the government places a “D Notice” on the event, preventing accurate reports of the number of casualties to avert a collapse of morale in London. Officially 73 people died. Locals know that of the 600 or so men, women and children in the building, over 450 were killed instantly, many more in the hours thereafter, and almost all of the survivors suffered injuries. The Hoffmann family were blown to unrecognisably small pieces.

Four days later the Horowitz family unfolds stiff limbs and climbs down the steep steps of a bus in the centre of Carmarthen, and are introduced to the farmers who are to take them in. Four weeks of regular enforced chapel attendance later, Charles runs away and jumps on a Great Western milk train to London where he spends the next, and best, years of his life, running wild on the rubble-strewn streets of London and the one artery the Luftwaffe never managed to close: the River

Matthew Smith of Urbane Publications is very kindly giving away a paperback copy of ‘The Lighterman’ for each stop on the blog tour.  To enter just leave a comment telling me what you thought of the extract.  Has it left you wanting to read more?  Are you totally intrigued?

The winner will be randomly selected and notified by the end of this week and their details will be passed on to Matthew Smith who will send out the prize.

‘The Lighterman’ is available to buy from:-

One thought on “Blog Tour – ‘The Lighterman’ by Simon Michael”