Blog Tour – ‘The One That Got Away’ by Annabel Kantaria 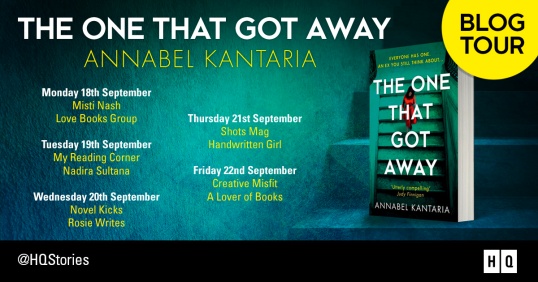 ‘The One That Got Away’ was published in paperback and as an eBook on the 21st September 2017 by HQ Stories.  I am delighted to be closing this blog tour along with Creative Misfit and I have for you a guest post by Annabel Kantaria.  First though, here’s what the book is about.

Everyone has one. An ex you still think about. The one who makes you ask ‘what if’?

Fifteen years have passed since Stella and George last saw each other. But something makes Stella click ‘yes’ to the invite to her school reunion.

There’s still a spark between them, and although their relationship ended badly, they begin an affair.

But once someone gets you back, sometimes they’re never going to let you go again…

On the mixed emotions of school reunions

Hello Sonya, and thanks for hosting me today as part of my blog tour.

How do you feel about school reunions? Have you been to one? Avoided one?

‘The One That Got Away’ begins when a couple who used to date at school meet up at their fifteen-year school reunion. As the story begins, you see the protagonist, Stella, who’s now a successful businesswoman, taking a moment to gather her thoughts before she goes into the venue. She’s not sure if she wants to go: she knows that her ex-boyfriend George – who’s now a bit of a celebrity – will be there. They parted on bad terms when they were eighteen, and Stella hasn’t seen him since. In fact, as she sits in the taxi, she’s not sure why she clicked yes to the invitation in the first place. Her life’s sorted now… but then, there always was something special about him. He’s ‘the one that got away’, and a part of her wants to show him what a success she’s made of her life.

My own year group had a reunion a few years ago and I knew at once that I wanted to go: aside from hoping that no-one would remember the incident involving the music teacher and a scotch egg, I had no need to avoid anyone, and I’m very nosy, which is ultimately what it’s about, isn’t it? You want to see how everyone’s really turned out without the benefit of Instagram filters and Facetune. And, despite experiencing last-minute nerves just like Stella, I’m glad I went. It was fun to see everyone again. It was really good to meet them all as adults, and to realise that, no matter who was in the ‘in’ crowd and who was geeky back in the day, we’re all treading the same paths now: even the coolest kids are just pretty normal adults dealing with partners, families, jobs and aging parents.

But, more than that, it was wonderful to meet up with people with whom I have a shared past. I realised that night that, whether or not you liked them at school, you have a unique bond with your classmates. No matter where you all live and what you do now, there’s a pot of really special memories that you can share only with them. Memories of teachers, of catch-phrases and of silly things that happened in the classroom – that time you projectile-vomited on the biology teacher’s shoes / set fire to your pencil case with a bunsen burner / fell flat on your face collecting an award in assembly – no-one else remembers these things and it’s fun to reminisce.

So, yes, for me, the reunion was a good thing, but for my fictitious Stella, the reunion’s a catalyst that kicks off a chain of increasingly dark events. I’d go as far to say that, if you’ve got a reunion coming up – and especially if your ex will be there – you might want to save reading ‘The One That Got Away’ until after you’ve been! 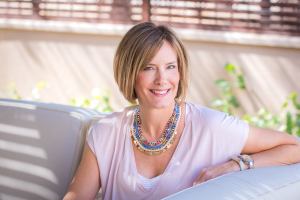 Annabel Kantaria is a British journalist and columnist who’s written prolifically for publications in the UK and the Middle East. She lives in Dubai with her husband and two children. Her debut novel, Coming Home, won the Montegrappa Prize for First Fiction at the 2013 Emirates Airline Festival of Literature. Her second novel, The Disappearance, was published in Spring 2016.

Posted in Blog Tours, Guest Blog Posts and tagged Annabel Kantaria, HQ Stories, school reunion, The One That Got Away, third novel, thriller